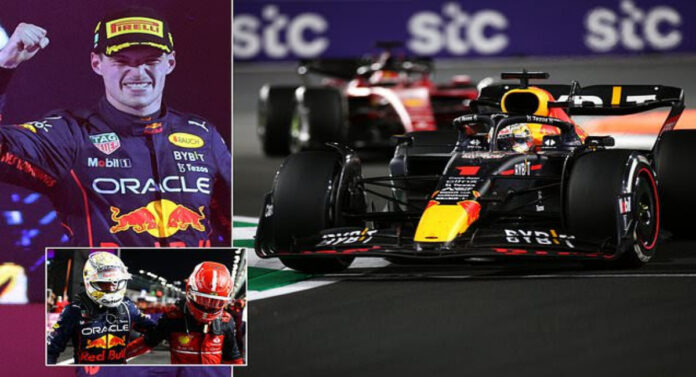 Like a new champion, buoyed by confidence and with a defence to jump-start, Max Verstappen atoned for the mishaps of Bahrain with a wonderful display to claim a dramatic victory in this desert sequel. A week after he suffered a steering glitch, complained of a battery problem and then ground to a halt with a fuel pump malfunction, he conjured assurance and pace to win the cursed Saudi Arabia Grand Prix. As he vied once again with Ferrari’s Charles Leclerc, his nip-and-tuck rival and vanquisher of seven days before, for the lead here in the closing laps, so absorbing was the theatre that thoughts were drawn away from Friday and the missile attack that landed some 12 miles east of the super-fast, terrifyingly narrow Corniche circuit.

Up to the last, the result hung in the balance. Could Leclerc launch one final assault out of the final bend and poke his car’s red nose ahead at the chequered flag? No, the Dutchman’s margin of revenge at the end of 50 laps was a mere half a second. Carlos Sainz, in the other Ferrari, finished third. Sergio Perez was fourth for Red Bull. These two teams are in a league of two, a point graphically demonstrated to Lewis Hamilton, who finished 10th. It was a decent drive and he was hindered by some ill-luck. Even at this putative stage, the 37-year-old Briton all but wrote off his chances of winning an eighth world title this year. His Mercedes team-mate George Russell peddled well to fifth but he was still more than half a minute adrift. More of Mercedes later, but let’s start close to the end and the climax of this, the second race of the 23-round programme, and the leading pair’s battle royal.

Verstappen first passed Leclerc at the final corner of lap 42 but the Monegasque returned to the lead within moments, having employed motor racing’s equivalent of rope-a-dope, knowing that coming from behind he had the advantage of DRS on the pit straight. This was clever boxing. Each was alive to the tactic and danced around the ring as the moment of exposure presented itself. Finally, decisively, Verstappen bided his time on that 27th bend of 27, and roared into the lead down the straight. He then zoomed away, turning the timing screens purple, the colour that signifies the fastest lap of the race. This put him just out of reach for the evening, try as Leclerc might to stick to his tail like glue.

‘It was really tough but a good race, battling hard at the front,’ said Verstappen, before a giant fireworks display lit up the night sky and thundered through the air. ‘We just tried to play the long game. They were quick in the corners and we were quick on the straights. ‘The tyres were wearing out quite quickly around here. You could see at the end we had a little more pace, so I tried to get by. ‘It wasn’t easy playing smart tricks in the last corner but eventually I managed to get ahead. I’m glad we’ve kick-started the season.’ Leclerc and Verstappen showed each other respect on the track. It was clean and one’s heart did not unduly jump into one’s mouth.
‘It wasn’t enough but my God, I really enjoyed that,’ said the beaten man, who nevertheless leads Verstappen by 45 points to 25. The leading pair were helped when Williams’ Nicholas Latifi crashed into the wall 17 laps in, propelling his front wing on to the road.

Hamilton missed the chance to pit behind the VSC after Valtteri Bottas (pictured), Fernando Alonso and Daniel Ricciardo all suffered mechanical issues in quick succession and retired from the race.
A virtual safety car (VSC) was deployed, and then an actual safety car. At this stage, pole man and the then rightful leader Perez had pitted and was lying fourth. The three men ‘in front’ of him, but yet to be re-shod, took the chance to peel in for a free stop. From this point, Leclerc led, with Verstappen second. As for Hamilton, he stayed out, having worked his way up from 15th on the grid to 10th. Verstappen took his first points of the season and is now 20 behind championship leader Leclerc who also took fastest lap By not pitting he was up to seventh and then he passed Kevin Magnussen of Haas for sixth.

He had to hope for a second VSC, which came on lap 37, when Alpine’s Fernando Alonso and McLaren’s Daniel Ricciardo conked out. But he could not nip in for timely new tyres because the two stricken cars were stranded in the pit lane, which was consequently closed. With nine laps remaining, the VSC exited and Hamilton went into the pits belatedly, but emerged in 12th, before elbowing his way up into the last of the points positions by the end. ‘The result was not great,’ he said. ‘We are not fighting for the top step. We are so far off the guys ahead that winning feels like a long way away.’ But even without Lewis, an epic title duel may just be sparking into life.