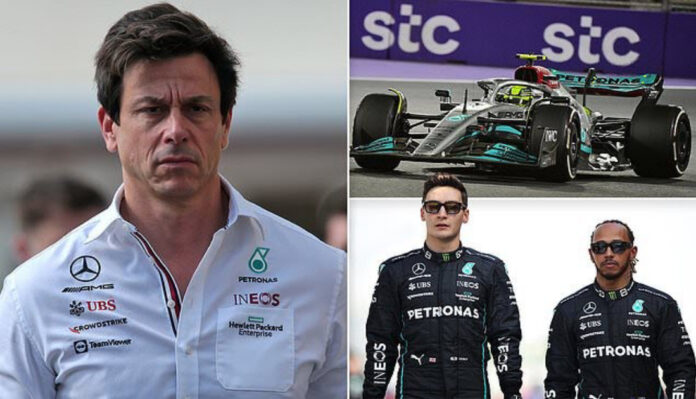 Lewis Hamilton, Mercedes, followed by Pierre Gasly, AlphaTauri. Saudi Arabia, March 2022. Mercedes are of course pushing for a fix to their problems, but Toto Wolff warns it will not magically arrive in Melbourne. The Silver Arrows went into the 2022 campaign with ambitions of collecting a ninth Constructors’ Championship in succession, but if they are to extend the streak, then major gains are needed from the point where they have started in this new regulatory era. Red Bull have continued at the front, following on from their epic rivalry with Mercedes in 2021, but Mercedes have been replaced in that fight early on this season by Ferrari.

Mercedes meanwhile find themselves somewhat in no man’s land, running as the third-fastest team in race trim, but no match for the two teams out front. The third round of the campaign is now though almost here, as Formula 1 makes its return to Albert Park for the Australian Grand Prix. Much of the W13’s problems, it seems, revolve around the bouncing and also drag, with Mercedes expected to bring an updated rear wing to Albert Park in a bid to address the latter issue. However, Wolff warned that his team’s problems can not be fixed so suddenly.

Lewis Hamilton in traffic in the race. Saudi Arabia March 2022 “We are in a learning race and the first two weekends have shown we still have plenty to learn,” he said in Mercedes’ Australia GP preview. “At the moment, our track performance is not meeting our own expectations, but everyone at Brackley and Brixworth is focused on understanding the problems and finding the right solutions. “There won’t be a magic fix for the next race weekend, but we’re pushing to steadily bring gains over the up-coming races, to hopefully move us closer to the front of the pack. Until then, we need to maximise each opportunity and make the most of the package we have. “So, there are various challenges ahead of us, but that’s something we relish and is when a team really shows its true spirit.”

Ex-Formula 1 racer David Coulthard recently challenged both Mercedes drivers, George Russell and Lewis Hamilton, to make their voices heard and help claw the team back to winning ways. And Wolff confirmed that Hamilton and Russell are making an “important contribution” to Mercedes’ efforts. “Lewis and George are making an important contribution to the overall effort, providing feedback, spending time in the simulator and working together to help push us forward,” said Wolff.

“Now we head back to Melbourne for the first time since 2020 and will be racing in Australia for the first time in three years – that’s too long for a city and country that are so passionate about “We’re looking forward to seeing the fans and the new track layout which promises more overtaking opportunities and faster lap times.”