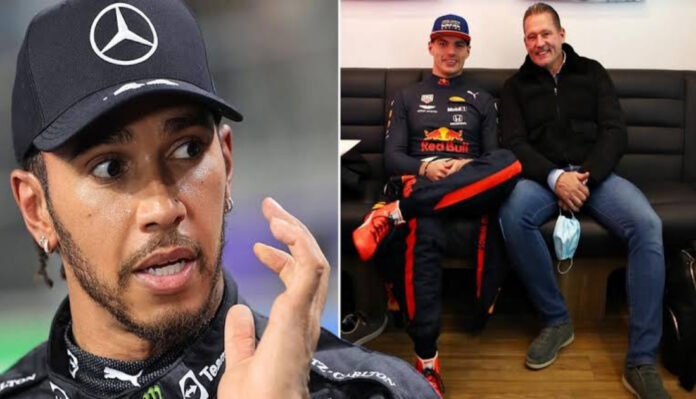 Max Verstappen’ s dad Jos shared what he said to Lewis Hamilton ‘s father Anthony following the aftermath of the controversial Abu Dhabi Grand Prix finale. They were both on hand to watch their sons go head-to-head in the F1 2021 title showdown at the Yas Marina circuit last December. There was jubilation for the Dutchman, but utter despair for Hamilton as the finale played out in controversial fashion. The Mercedes driver, who was denied a record eighth championship, was consoled by Anthony at the end of race, while Jos joined in the celebrations with Max and his Red Bull team.

Race director Michael Masi allowed some lapped cars to overtake the safety car, a decision that handed Verstappen the chance to win the title on the last lap. Following the race, Mercedes were furious and even lodged an appeal in a bid to overturn the race result which was unsuccessful, but Masi was later removed from his role. However, the Australian could be handed a lifeline after the FIA revealed they are negotiating a new role for him.

Jos, 50, a former F1 driver, revealed after the race that he had been speaking to Anthony via WhatsApp throughout the season. But when opening up on the moments after his son’s victory, he said in December last year: “When I was sitting with Max before he went up to the podium, [Lewis’ father] Anthony was there. He congratulated us, so that was really nice.

“Also, during the season, I had some conversations with him over WhatsApp. He’s really nice. They’ve won seven titles already so, for them, it is a bit different to when we won the first one, but he’s always respectful.” Back in December, the elder Verstappen also explained how Hamilton came to congratulate him after his son won his maiden world title. “I was, and the whole team, were going crazy,” Jos Verstappen said in interview for sponsor CarNext.

“But of course, you also have the other side, where they are very disappointed and upset. I think what was nice, was Lewis immediately came to me [and said], ‘Well done, congrats’, you know, and I said, ‘Thank you very much for an amazing season’. “Because, at the end of the day, I think it was an amazing season, whoever won or came second, because we did push each other every single race to the limit with ourselves, but also the car and the whole team. Everyone is very happy that the season is over, to have a bit of a break, because it has been very tense and very tough on everyone. But yeah, it was definitely a great rivalry.”

This included employment as a double glazing salesman, washing dishes, and putting up signs for estate agents, while still attending his son’s races. Anthony would help Lewis break into the world of go-karting, and later managed his son throughout his racing career up until 2010. Jos has naturally been heavily involved in his son’s career from the very start. But this caused problems with other F1 figures, as he was told to take a step back by Red Bull in 2016.