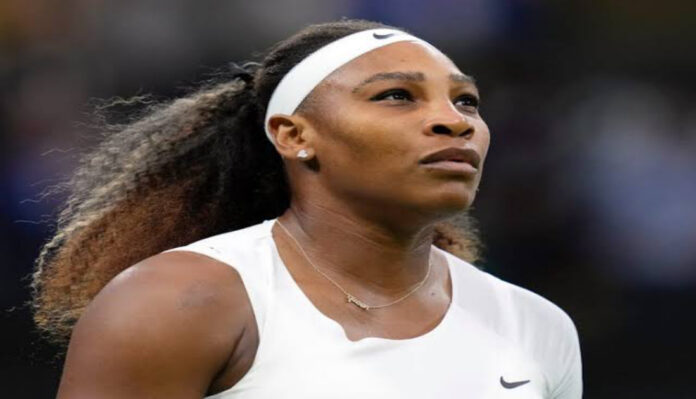 Serena Williams has shut down rumours she could retire from tennis by teasing a stunning return to Wimbledon this summer. The 40-year-old was subject to fierce speculation about her future after news she had split with her long-time coach Patrick Mouratoglou, who has been permission to work with rival Simona Halep. But in a huge twist Williams appeared in a clip on social media talk up her prospects of a ‘comeback’ after nine months out of the game.

Speaking alongside Green Bay Packers quarter-back Aaron Rodgers at a Bitcoin conference in Miami, she assured fans she was still planning to feature at another big tournament, hinting that she may also play at the US Open later this year. ‘I am backstage at a Bitcoin conference in Miami with Aaron Rodgers here. We’ve been talking about my comeback and he’s been hyping me up and getting me ready for Wimbledon. Can’t wait!’ Rodgers joked he was Williams’ ‘hype man’, before pretending to be shocked by the news: ‘Wimbledon? What about the US Open?’

The 23-time Grand Slam winners then says ‘exciting’, as Rodgers adds: ‘She’s back.’ Williams missed the Australian Open at the start of the year after picking up a hamstring injury and has not played a match since June last year – which was coincidentally at Wimbledon. And with retirement on the horizon, rumours about her possible retirement flooded social media after Mouratoglou – her coach for the last 10 years – confirmed they will be going their separate ways.

Mouratoglou said he had ‘opened a door’ for him to work with the Romanian star ‘at least short term’ after holding talks with her, and insisted he has ‘missed coaching’ while Williams has been inactive. ‘In the last eight months I realised how much I’ve missed coaching,’ he said in a statement on Twitter. ‘It is the passion of my life and I still feel I have so much to give. ‘Simona came to the Mouratoglou Academy before Indian Wells for a training block. I swung by at a few of her practices, watched her train.

‘At the end of the week, she asked me if I was available to coach her. I have the highest respect for her but it was out of the question at the time. ‘A few weeks later, I had a conversation with Serena and the door opened for me, at least short term, to work with someone else. ‘I will keep you updated on what is coming next soon.’ Halep commented on the post, simply replying with a fist emoji to express her excitement about working with him. Fans immediately began to speculate if the statement was an unofficial confirmation of Williams’ retirement, with one asking: ‘Are you inadvertently confirming that SerenaWilliams has retired from tennis?’ Another response to the news read: ‘Tell me Serena Williams has retired without telling me Serena Williams has retired.’

‘I’m taking this as Serena’s official retirement announcement,’ said another post, while one user admitted she was ‘not ready’ for the player to call it a day. ‘Oh lawd, Serena about to annouce her retirement? I’m not ready,’ it said. Australian star Ash Barty announced her own shock retirement from tennis last month, leading fans and pundits to speculate on Williams’ future, but the veteran played it coy when asked about hanging up her racket in March, saying she was ‘planning for today’. ‘I think every tennis player thinks about the R-word [retirement] as soon as they hit five years because tennis is so intense, it’s literally 11 months out of the year,’ she told Bloomberg. ‘But I don’t know. I’m living for the day and I always tell people, ‘I’m not planning for tomorrow, only in business, and when it comes to tennis, I’m planning just for today.’

Serena Williams I Am Interested In More Films About My Life…There Is Alot To Reveal, This Time Solely About Myself…