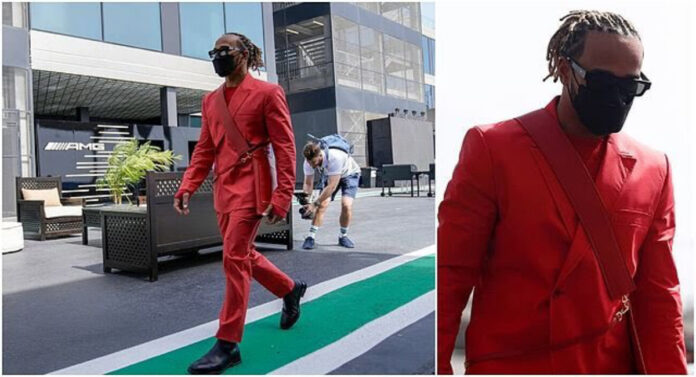 LEWIS HAMILTON was unable to challenge Mercedes team-mate George Russell for a podium at the Australian Grand Prix. Lewis Hamilton was clearly frustrated towards the end of the Australian Grand Prix at being stuck behind George Russell in a battle for third. Mercedes were once again capitalising from Max Verstappen’s retirement, which bumped the two Mercedes drivers up the grid. Hamilton had qualified ahead of his team-mate to start fifth on the grid and quickly moved up to third at the first corner of the race. Sergio Perez was stuck between Hamilton and Russell for the first stage of the race before the Red Bull driver eventually regained his third place.

Mercedes were maintaining good race pace and Hamilton was soon closing in on Perez before Sebastian Vettel crashed, bringing a safety car out. Russell benefited most as his scheduled pit stop came at the very moment the safety car was deployed, meaning he managed to climb up the third behind Charles Leclerc and Max Verstappen. That left Hamilton clearly frustrated, complaining on team radio at the time of more bad luck behind a safety car. Hamilton was soon able to overtake Fernando Alonso and move up to fifth with Perez than moving past Russell for third.

But the order was once again altered later in the day after Max Verstappen was forced to retire with another mechanical issue. That put a podium spot in play for Mercedes with Russell holding third spot ahead of Hamilton. At one stage, the seven-time world champion appeared to be closing in on his team-mate. But the final few laps saw Hamilton drop off as Russell secured his second podium in Formula One. Hamilton was left frustrated at the situation though with a spiky message on team radio before the chequered flag. “You guys put me in a really difficult position,” Hamilton said.

It’s not clear whether Hamilton was given team orders to not fight with Russell on the track. Russell has now moved up to second in the Drivers’ Championship, but Charles Leclerc is way out in front with his second win of the season. The 24-year-old led from start to finish with no real pressure from those behind him. Verstappen appeared to be close at one point, but Ferrari had much better race pace and was even able to clinch the fastest lap at the end.

The Dutchman’s retirement may also prove costly for Red Bull on a day where Carlos Sainz beached his car in the opening laps. Ferrari hold a 39-point lead in the Constructors’ Championship over Mercedes with Red Bull even further behind their rivals. It’s now two retirements for Verstappen in the opening three races and he’ll be hoping for better luck next time at the Emilia Romagna Grand Prix later this month.