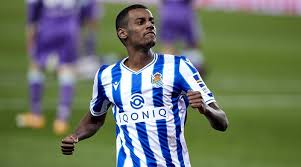 Arsenal have allegedly made a fresh approach to snap up the La Liga outfit Real Sociedad striker Alexander Isak.

According to a recent report from Sport, the English giants have made fresh contact with the agent of Sociedad attacker Isak in the hope of driving down Los Txuri-Urdin’s €80 million (£66.8 million) release (buy-out/exit) clause.

The same report adds that Imanol Alguacil’s side currently have no interest in negotiating a sum, but Isak’s recent run of matches without scoring could see the club board relent and allow the 22-year-old frontman to leave for less.

Xavi’s Barcelona have also been touted with an interest in the player, who has only hit four goals in 20 division games this campaign and is under contract at Reale Arena until 2026.