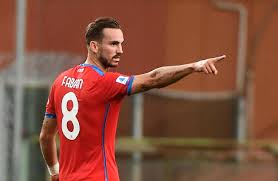 Napoli midfielder Fabian Ruiz has rejected an approach from Arsenal ahead of the summer transfer window.

The Gunners have been linked with a summer swoop to sign the Spain international as a potential replacement for Granit Xhaka.

A midfielder is on the list for the North London outfit in the January winter transfer window alongside a striker but all efforts to tie up a deal.

According to Italian journalist Raffaele Auriemma, Ruiz isn’t keen on joining Arsenal as he waits for other offers.

Speaking on the Club Napoli Night, he said: “I believe that Fabian Ruiz will leave Napoli at the end of the season.

“There’s been a proposal from Arsenal.

“But I understand that the player doesn’t want to join the Gunners.

“The midfielder is waiting for other offers, be they from Paris Saint-Germain or Real Madrid.”

Granit Xhaka was linked with a move to AS Roma but the deal did not happen and it’s tipped that he could still join the Italian outfit in the summer.

READ ALSO:   Ex-Liverpool star praises “crazy” signing and insists he should “100%” stay at the club

While admitting that there were efforts to have a new face at the Emirates Stadium in the winter, Mikel Arteta promised the fans some business will happen in the summer transfer window.