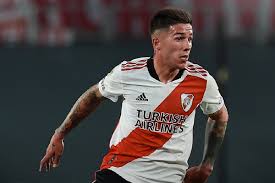 Arsenal and Tottenham are reportedly in the battle for River Plate youngster Enzo Fernandez. The 21-year-old midfielder is currently making a name for himself in South America, with Real Madrid, Arsenal, Tottenham, West Ham United and Aston Villa are all interested in the footballer.

The Argentine midfielder has played 28 games for River Plate despite his young age and has clearly impressed around Europe. River Plate recently sold Julian Alvarez to Man City but were allowed to keep the striker on loan for the remainder of the campaign.

This could be a sweetener in any deal from the likes of Gunners and Spurs, who could allow Enzo to stay at River Plate for a season if they were to sign. This would benefit all sides, with the Argentine club able to keep a crucial figure for an extra year, as well as receive a fee for him.

Whoever signs Enzo can allow him to develop somewhere he is already getting game time. Finally, Enzo is able to play first-team football and gain further valuable experience, before making the step up. Mikel Arteta has shown this season how he is willing to give youth a chance, and the Argentine midfielder would be a welcome addition to his squad.