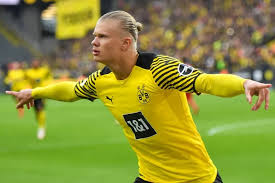 Barcelona and Real Madrid are both keen to sign Erling Haaland from Borussia Dortmund this summer transfer window. And according to Diario Sport it’s Barcelona who the Norwegian forward wants to join; he’s been seduced by their project.

Xavi Hernandez met with Haaland in Munich last week and outlined his vision at Camp Nou. He’s committed to a young team and is confident about their bright future. Barcelona are now getting their finances in order to facilitate a deal that’s expected to come to around €250m in total.

In order to be able to do the deal, Barcelona will close a deal with CVC and sell 49% of Barcelona Studios; they have an offer on the table of €350 million for that. They believe they can get it done.

As their chief competitors for Haaland’s signature, Barcelona believe that Manchester City pose much more of a threat than Madrid. They believe that the way in which the latter are pursuing Kylian Mbappe has hamstrung them in the race for Haaland.

READ ALSO:   Barcelona's attack is more effective than ever