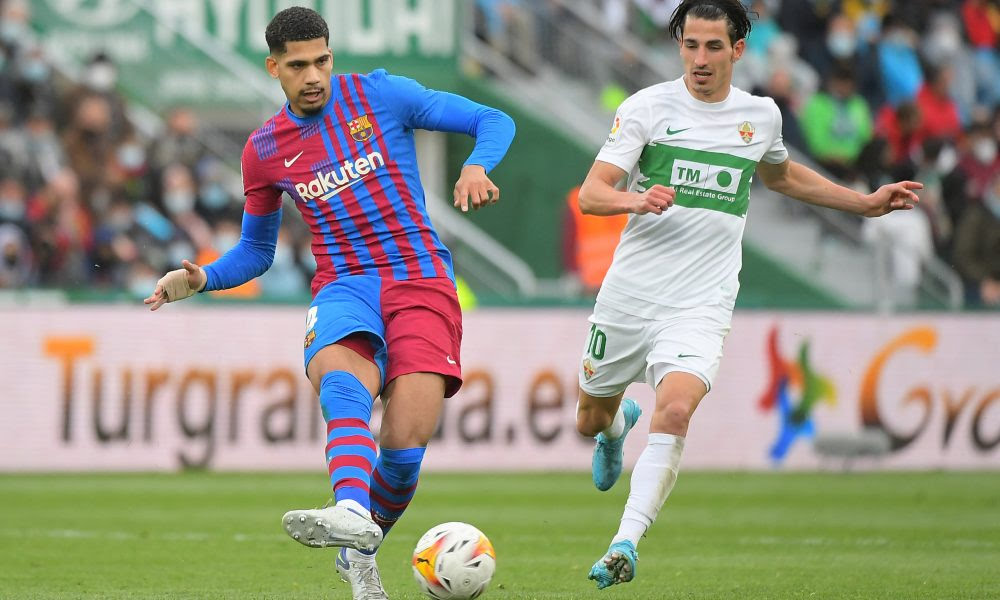 Barcelona moved up to third place in the La Liga standings following their narrow 2-1 win over Elche CF on Sunday afternoon. The Catalans have now gone 11 games without a loss in the top-flight, generating important momentum ahead of the business end of the season.

The next few weeks are set to be crucial for the Blaugrana as they face Galatasaray in the UEFA Europa League Round-of-16 stage. At the same time, the biggest fixture of the La Liga calendar, El Clasico, is on the horizon for Xavi Hernandez & co.

Barcelona will travel to the home of their arch-rivals on March 20 and having lost two Clasico fixtures this season – one in the league, the other in the Spanish Super Cup, the Catalans will be eager to set the record straight by picking up a win, which in turn could hurt their rivals’ title ambitions.

However, the Blaugrana could have to do so without star defender Ronald Araujo if he picks up a booking in their next La Liga encounter against CA Osasuna.

READ ALSO:   Laporta: Messi's departure is the saddest decision I've ever made, but I don't regret it

The 22-year-old, who has been a pillar of strength at the back for Barça, has featured 21 times in La Liga this term, scoring three goals. However, he is currently on four yellow cards for the season, with the latest one coming at Elche when he took out Pere Milla with a strong challenge.

Should he accrue another booking in the next league game against Osasuna, that would rule him out for the big game versus Real Madrid due to the accumulation of cards. Such a scenario would be unpleasant for Barça despite the fact that Gerard Pique has been in impressive form of late.

It will be interesting to see how Xavi decides to approach the situation. But given Araujo’s importance to the team, it would not be surprising to see the manager take him out of the lineup against Osasuna to ensure he is available for the Clasico.