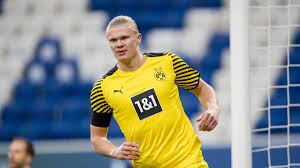 Barça president Joan Laporta has been putting in the hard work to get the deal over the line, having held multiple meetings with Haaland’s agent, Mino Raiola. Recent reports indicated that the club supremo held another secret meeting with the super-agent in Monaco to discuss the move.

Now, Mundo Deportivo is reporting that the Catalan giants are open to the possibility of selling key players if need be, in order to bring Haaland on board before next season.

Barcelona see Haaland as an important part of the project moving forward, not only for the value he will bring from a sporting perspective but also on the financial front as his signing would attract a lot of attention and boost merchandise sale, sponsorship deals and more.

So, the Blaugrana are willing to go the distance to bring in the 21-year-old Haaland, even if could mean that they may have to let go of some of their important players from the current roster to stay compliant with La Liga’s Financial Fair Play rules.

At this point, it is well-established that Barcelona are prepared to fight with all their might to secure the signing of Erling Haaland in the summer.

The Borussia Dortmund hitman is on the radars of almost every top club heading into the upcomiing transfer window. Manchester City and Real Madrid, in particular, are hot on his trails along with Barcelona and an intense battle could be on the cards for his signing.

The deal to sign Haaland will easily cost in excess of €100 million. He has a release clause worth €75 million, while commissions to his agent and his father could come up to around €40 million. And the striker is also likely to command significant wages.

So, players could be sacrificed to generate the necessary capital and clear up room on the wage bill. It remains to be seen if the Catalans can avoid such a scenario or are forced to part with key players to fund a move for Haaland.