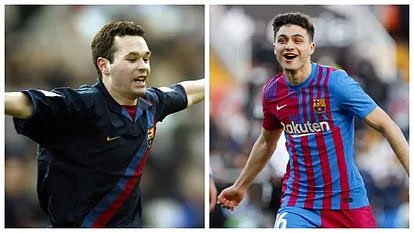 Pedri put on yet another show for Barcelona at the weekend. The youngster was again at his best as he helped the Catalans to a 4-0 win over Athletic Club at the Camp Nou.

Everybody who watched the game was impressed by the midfielder, and even his coach had some big praise afterwards.

“He reminds me a lot of Andres Iniesta,” Xavi Hernandez said of Pedri. “He’s wonderful. I haven’t seen another player in the world like him.”

Xavi had already piled praise onto his young midfielder, but on Sunday he went further and dared to draw comparisons to one of Barcelona and Spain’s greatest-ever players.

“He’s the best in the world in his position,” the coach had previously said. “There’s nobody else like him.”

Although there are differences between the two, they share a number of characteristics that support the comparison. Their vision and understanding of football stands out, as does their extraordinary creativity, versatility, intelligence, dribbling ability, and the simplicity with which they find space and use the ball. They’re both agile, have incredible control of the ball, are enormously talented in tight space, and precise in their passing.

At just 19, Pedri’s rise is meteoric. He has only been a LaLiga Santander player for two seasons, but is already one of the first names on Xavi’s Barcelona team sheet, while also being an important player for Luis Enrique at international level too.

On Sunday, he had the Camp Nou on its feet a number of times and he played an important part in Luuk de Jong’s goal. Beyond that, though, he was unplayable from start to finish. But this performance is no isolated event.

Iniesta, now 37, is considered one of the best midfielders of the modern era. He left his mark on Barcelona from 2002 to 2018, and on the national team. Both enjoyed a lot of success with him in the middle alongside Xavi, and now the latter believes that the man to succeed his former teammate is already working under his orders.