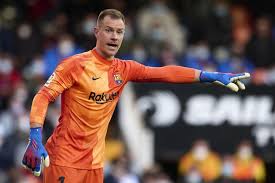 Barcelona are in the market for a goalkeeper who can serve as competition to Marc-Andre ter Stegen according to Marca. The German goalkeeper isn’t enjoying a vintage season at Camp Nou and Barcelona have decided to bring in another option.

Because even though his form hasn’t been stellar Ter Stegen is still Barcelona’s undisputed starter between the posts in all competitions. The only times Neto, his understudy, has been given a place in the starting XI has been when the number one was either injured or suspended. That’s happened three times.

Ter Stegen, 29, joined Barcelona in the summer of 2014 from Borussia Monchengladbach. He’s since made 312 appearances for the Blaugrana, keeping 123 clean sheets and conceding 316 goals. He’s earned 27 caps for the German national team.