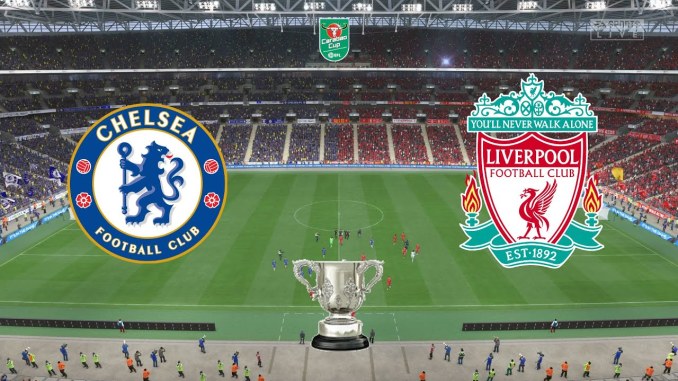 The much anticipated match of the season is finally upon us as Chelsea face Liverpool in the Carabao Cup final at Wembley Stadium on Sunday.

The Blues walk into the game following a 2-0 win over Lille in the Champions League round of 16 whilst Liverpool beat Leeds United 6-0 at Anfield in the Premier League.

Having clinched UEFA Super Cup and FIFA Club World Cup earlier this season, Thomas Tuchel’s side will keen to come out top and claim their first domestic trophy under the German tactician.

Chelsea are currently sitting third in the Premier League, with ten points behind second-placed Liverpool. Neither side have claimed a win over the other side in their last two meetings this season, with both league fixtures ending in a stalemate.

The Blues are on a run of six straight wins in all competitions, whilst the Reds are are unbeaten in their last 12, with their defeat coming against Leicester City last year.

During his press conference on Friday, Tuchel confirmed that Reece James, Mason Mount and Callum Hudson-Odoi are back to training at Cobham ahead of the final.

Ben Chilwell, who is sidelined with an ACL injury until the end of the season, was the only absentee, with Mateo Kovacic and Hakim Ziyech both back to training following the scares against Lille in the midweek game in the Champions League.

“We had training today with everybody out on the pitch except Ben Chilwell,” said Tuchel in his pre-match press conference. “Brilliant news. This is pretty much it.

“Both (Hakim Ziyech & Mateo Kovacic) okay. Everybody joined training from the first to the last minute. We had at the moment no reactions but positive reactions. I hope it stays like this. We have another training tomorrow to have everybody available for Sunday.”

No decision has been made on who will start in goal for the Blues on Sunday. Tuchel won’t be ‘sentimental’ as Kepa eyes a start at Wembley.

Liverpool will be without Roberto Firmino, whole Diogo Jota is a huge doubt.

“He isn’t ruled out but still it will be a challenge,” said assistant manager Pepijn Lijnders.

Liverpool are in a rich vein of form, confident at the back and having no problems when it comes to scoring goals – their record of 11 goals scored in their previous three matches proves just that.

Tuchel insists Liverpool are favourites but the German remains confident and will be itching to ditch his Wembley final heartbreak from last season’s FA Cup final to clinch domestic glory and his third trophy of the campaign.

When it comes to one-off games, Chelsea have proven themselves to be a side who get the job done, just like they did in the Club World Cup earlier in February.

If Chelsea can withstand the pressure from Mohamed Salah and the Red’s attacking line, while being ruthless and clinical when chances come their way, they could win their first League Cup since 2015.