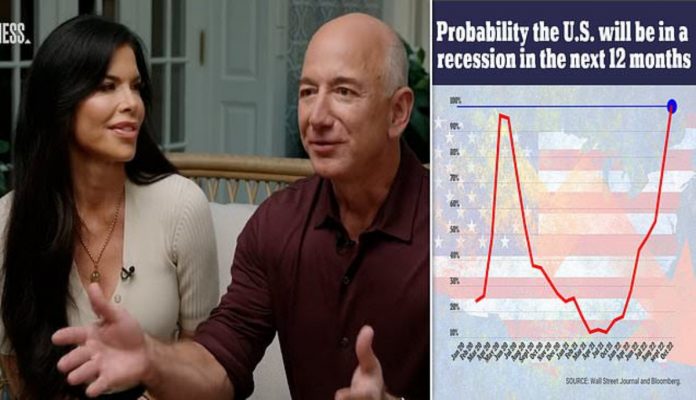 Amazon founder Jeff Bezos recently warned consumers and businesses in a CNN interview that they should consider postponing large purchases in the coming months as an economic recession might be in the offing. The billionaire told American families not to buy new cars and TVs as US is staring at a recession, with household debt soaring to $16.5 trillion and Americans relying on credit to make ends meet.

“My advice to people, take some risks off the table. If you’re going to make a purchase, maybe slow down that purchase a little bit. Keep that cash, see what happens – take some risks off the table,” advised Bezos. “If you’re an individual considering to purchase a big-screen TV, you might want to wait, hold onto your money, and see what transpires. The same is true with a new automobile, refrigerator, or whatever else. Just remove some risk from the equation,” said Bezos during the interview.

“The economy does not look great right now,” he said, sitting alongside his partner Lauren Sanchez. “Things are slowing down. You’re seeing layoffs in many many sectors of the economy.” The former CEO of Amazon also advised small business owners to put off purchasing new equipment in favour of increasing their cash reserves. He advised: “Take as much risk off the table as you can. Hope for the best, but prepare for the worst.” In the same interview, Bezos said he plans to give away the bulk of his fortune during his lifetime. Bezos is worth $123.9 billion, according to the Bloomberg Billionaires Index.

Meanwhile, Amazon CEO Andy Jassy has revealed that the company will continue to fire employees till 2023. The layoff process began earlier this week, when the company announced that they are letting go employees from the Devices and Books businesses. The dire announcement comes close on the heels of reports saying America’s second largest private employer would cut around 10,000 jobs.