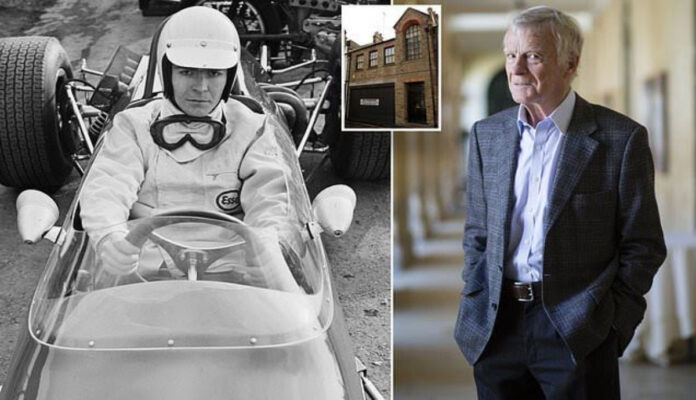 Ex-Formula One boss Max Mosley killed himself by shooting himself in the head with a shotgun in his Chelsea bedroom after learning he had weeks to live following months of treatment for cancer, a coroner heard today. Mr Mosley, whose father Sir Oswald Mosley was the wartime leader of the British Union of Fascists and a Hitler sympathiser, was an outspoken president of the FIA, Formula 1’s governing body, for 16 years between 1993 and 2009.

The tycoon, a qualified barrister and former racing driver, later became an enemy of the free press and backed calls for stricter controls on the media after Rupert Murdoch’s tabloid News of the World published photos and video of him at a sadomasochistic orgy with five prostitutes in 2008. An inquest at Westminster Coroner’s Court today heard that he was told he had just ‘weeks’ to live despite months of treatment for a type of lymphoma. The chronic bowel and bladder pain he was experiencing could only be reduced with palliative care but not cured. A neighbour and his housekeeper called 999 after they discovered a note on his bedroom door, stating ‘do not enter, call the police’, the remote inquest attended by witnesses and family heard.

The night before, Mr Mosley had told his housekeeper that he had ‘had enough’ and was going to take his own life, before he had a final meal with his wife Jean, who lived in a separate house a couple of doors away. Officers discovered the body of Mr Mosley with injuries consistent with a gunshot. A second note found on his bedside table was barely legible, due to the large amounts of blood, but the few words officers could make out were ‘I had no choice’, Westminster Coroner’s Court heard. In a record of his last final moments, his personal assistant of 20 years Henry Alexander said he had gone over to Mr Mosley’s home at his request at around 3pm the day before he took his own life. He said: ‘He was sat in an armchair in a despairing way. He spoke to me and said I’d been amazing and thanking me. ‘He said he’d had enough, had intentions of killing himself. I begged him to reconsider and said, ‘please, there must be another way’.

‘He said he’d made up his mind. When I pleaded with him, [and] asked him if he could give it 24 hours, he said ‘why?’.
Mr Alexander said he returned home and sent him texts saying how important he was to his life, which was echoed in his partner’s Paul texts that were also sent to Mr Mosley, in which he responded ‘thank you’. He later said he last saw him through the window making his way to his wife’s house a couple of doors down from his own. Detective Constable Ben Benlounes, who gave evidence at the hearing, said Mr Mosley had dinner with his wife at around 7pm. He said: ‘She described him as being in great pain, and he did not eat much. ‘He returned home and he called her to say he was inside the property.

‘She described him as being very frail and he did not know where to turn to.. He had been too ill and he had very little quality of life. ‘The following day, Mr Alexander said he accessed Mr Mosley’s house via his basement flat after 8am. He said he sent Mr Mosley a text asking him if he wanted breakfast upstairs. ‘I rang him and it went to voicemail. I went upstairs and there was a note attached to the door reading ‘do not enter’ and ‘call the police,’ Mr Alexander said.

‘I dialled 101 and then called 999. I did not hear any unusual noises coming from the house.’ DC Benlounes said he arrived at the scene at approximately 10.15am and spoke with the acting inspector. He said: ‘During that time, the family’s doctor exited the car to say Mr Mosley had a large lymphoma which had been irritating the bladder. ‘He did say that the consultation was he may have two to three weeks left and this could have been the reason why he killed himself.’

The officer confirmed there were no signs of anything suspicious or forced entry and that Mr Mosley had possession of a gun licence with four guns in the property. He said: ‘On the chest of drawers there was a suicide note which was covered in blood. The writing was faint but I could read, ‘I had no choice.” Senior Coroner Dr Fiona Wilcox said: ‘On May 24, 2021, police were called to the address of Mr Mosely, attended, and found him lying on his bed with a gun in the vicinity. ‘He suffered significant injuries consistent with gunshot wound.’

The court heard how Mr Mosley developed diffuse large B-cell lymphoma, a cancer affecting immune cells, in 2019 and ‘explored all treatment options’ The inquest also heard a written statement from Dr Christopher McNamara, a consultant haemotologist who first saw Mr Mosley in October 2019. He said he had recommended a course of chemotherapy for prostate cancer.
Dr McNamara said: ‘At the end of the therapy he had refractory disease. ‘Over the next nine months, he tried a range of different treatment options – some of these were prescribed by myself and undertaken by Mr Mosley against my advice. ‘This included proton beam therapy and surgical therapy. During treatment, it was also discussed there was risk of developing a fistula. There was an enormous effort to try to prevent this.

‘Mr Mosley arrived at a point at the beginning of April when there was a shift away from treating aggressively and more towards controlling the disease and quality of life. I referred Mr Mosley to palliative care colleagues.’ He added: ‘Max had a terminal illness and accepted this would not be cured. ‘The treatment which had ben given to him recently was meant to control the illness. A fistula developed and he was extremely upset because of his quality of life which left him uncomfortable.
‘Mr Mosley had expressed ideas of committing suicide to myself and other colleagues and had been referred to appropriate colleagues. ‘He never expressed a plan of doing this and always said the problem was that his wife would not accept this. ‘He also indicated his affairs had been in order. ‘Dr Rasha Al-Qurainy, who led his palliative care, said that Mr Mosley never gave any indication of suicide ideation.