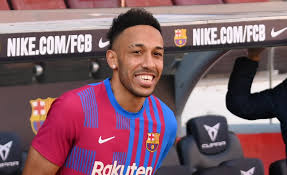 FC Barcelona had an intense winter transfer window, with Pierre-Emerick Aubameyang being drafted in on top of the signings of Dani Alves, Ferran Torres and Adama Traore.

Aubameyang is a striker who brings goals and experience to the Catalan outfit. He is a prolific scorer from inside the box and promises to wow the fans at the Camp Nou in the coming months.

He has Gabonese and Spanish roots

Although Aubameyang was born in Laval, in northeast France, he has Gabonese and Spanish roots. His father and former player, Pierre-Francois, hails from Gabon and his mother, Margarita, is from Spain. Thanks to his mother, the new Barcelona star already speaks Spanish.

He always dreamed of playing in LaLiga Santander

On his mother’s side, Aubameyang’s family are from the city of Avila and he always dreamed of playing for one of the big LaLiga Santander teams someday. Now he finally has the chance to feature in Spanish football’s top flight with Los Blaugranas.

He has already scored at the Camp Nou

Although he has represented European sides for a number of years, Aubameyang has never faced his new club, FC Barcelona, in an official match. However, he already knows what it feels like to score on the Camp Nou turf, having netted in one of Barca’s traditional pre-season friendlies.

He is the scorer of Gabon’s only Olympic goal

Aubameyang is the greatest player in the history of his national side (Gabon) and is already the all-time top scorer for his country (with 30 goals). The FC Barcelona forward is currently the only person to have scored for Gabon in the Olympics, at the 2012 Summer Games in London.

Over the course of his career, the frontman has signed off on some of football’s most creative goal celebrations. He is probably best known for his intrepid leaps after scoring, but not many people know that they have their roots in LaLiga. They are a tribute to the five-time LaLiga Santander top scorer and Mexican legend Hugo Sanchez, who was one of his grandfather’s favourite players.