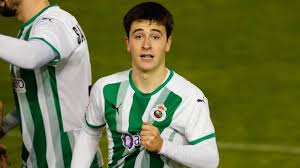 The 18-year-old Cantabrian has been vaunted as the most talented player to come out of Racing Santander since Sergio Canales, one of the best midfielders in La Liga this season.

Meanwhile in Mundo Deportivo, they have compared him to former Barcelona and Espanyol midfielder Ivan de la Pena. Regardless of whom he reminds people of, his talent seems to be in no doubt. According to MARCA, Real Madrid were involved in a fierce battle for his signature. Real Sociedad were also reportedly interested.

An international with the Spain under 19 team, Torre has played 48 matches for Racing. This season, he has stood out in the third tier of Spanish football, picking up six goals and six assists in 21 appearances from midfield.

The deal will cost Barcelona €5m initially, with the fee rising to €20m in variables, so say Diario AS. Torre will continue with Racing until the summer, when he will be incorporated into the B team at Barcelona. That being said, Barcelona see him having minutes with the first team as early as next season.

The situation is vaguely reminiscent of the way in which Pedri signed for Barcelona. The current star of Barcelona’s midfield moved on a similar deal and also had interest from Real Madrid. No doubt the Catalans would be delighted if Torre were to follow a similar trajectory.