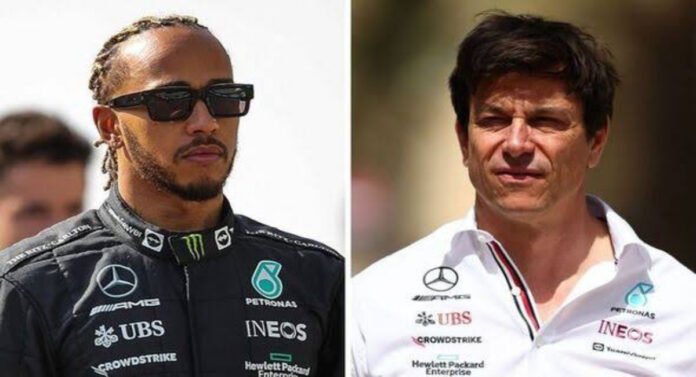 For the first time since the 2012 Japanese Grand Prix, Mercedes failed to get a car into the top-10 shoot-out, ending a run of 187 consecutive appearances. While a crash involving Ferrari’s Carlos Sainz and the rain both played a part in Imola, the W13 appeared woefully short of pace anyway to make Q3 on merit.

After being knocked out in Q2 to line up 13th on the grid for the Emilia Romagna’s sprint event on Saturday, Wolff and Hamilton could be seen engaged in a chat in the garage, with the former appearing particularly unhappy. Asked as to what was discussed, Hamilton replied: “It is all internal stuff. I won’t share that.

In Q2 and with rain arriving, Hamilton and team-mate George Russell both failed to set a lap time fast enough to break into the top 10 before Sainz’s crash at the second Rivazza. By the time the session was resumed, the rain had fallen and rendered the remaining minutes meaningless.

“It wasn’t a great session,” reflected Hamilton. “Naturally, it is disappointing. “We come here with optimism and everyone is working really hard at the factory and then things just don’t come together. I think we underperformed as a team. “There were things we should have done that we didn’t do today.

“We will work as hard as we can to move up in the sprint race. It is going to be a difficult race but hopefully it is better weather-wise and who knows, maybe we can make our way forward.