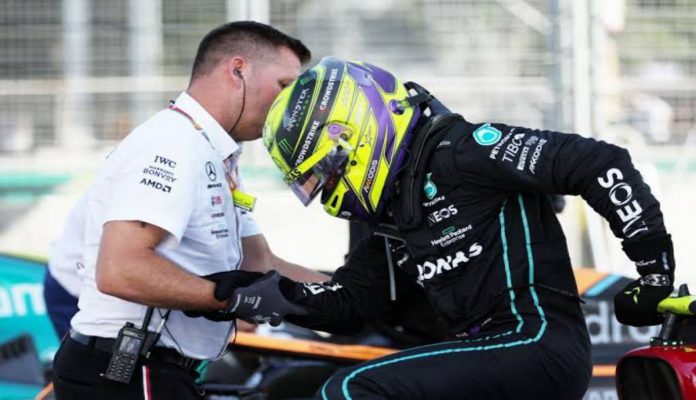 Lewis Hamilton says he was praying for the race to end after suffering intense back pain after his Mercedes porpoised during the Azerbaijan Grand Prix. Leclerc saved the best for last with his final lap, beating Red Bull’s Sergio Perez by 0.282 seconds. Perez beat team-mate Max Verstappen with his final lap, by just 0.065secs.

Ferrari’s Carlos Sainz was quickest after the first runs in final qualifying but a series of mistakes on his final lap left him fourth. Leclerc continued his status as Formula 1’s qualifying king this year, despite errors on his key laps in the first and second sessions which had held back his ultimate potential.

But he strung it all together when it mattered for his second consecutive pole position in Baku.
“All pole positions feel good but this one I did not expect it because I thought Red Bull were stronger,” Leclerc said. “Especially Q1 and Q2 I struggled to see we were faster but then in Q3 I managed to do a good lap.” Leclerc has not managed to convert a pole into victory since the third race of the season in Australia, since when he has seen a 46-point championship lead turn into a nine-point deficit to Verstappen.

READ ALSO:   Lewis Hamilton Written Off Ahead Of Saudi Arabian GP Due To Red Bull And Ferrari Advantage

Red Bull have taken four consecutive victories in that time – but two of them have come after an engine failure that cost Leclerc victory in Spain and a strategy foul-up that dropped him from first to fourth in Monaco. Leclerc said he was hopeful that the car upgrade Ferrari introduced in Spain would allow them to compete for victory with Red Bull on Sunday.

“I am really excited for tomorrow,” he said. “Tyre management is a big thing here. And our race pace has done a step up since we brought the upgrades.” Perez felt pole might have slipped through his fingers, as an engine problem in the garage meant he left the pits late and did not have the benefit of a slipstream on his final lap.

The same applied to Verstappen, who had been due to be towed by Perez but had to go out on his own after the technical problem. Verstappen said: “The start of the lap was good and then it went away from me a bit, tiny mistakes. Not what I want but being second and third we have a good opportunity for tomorrow. “We seem to lack a little bit on the one lap but over a long run our car should be quite good.” George Russell was best of the rest for Mercedes in fifth place, split from team-mate Lewis Hamilton by Alpha Tauri’s Pierre Gasly and 0.212secs.

Team boss Toto Wolff said Hamilton was trying an experimental set-up that did not work and cost performance. And Hamilton faces an investigation for driving unnecessarily slowly during the second part of qualifying, which could yet yield a penalty. Alpha Tauri’s Yuki Tsunoda was eighth, ahead of Aston Martin’s Sebastian Vettel and the Alpine of Fernando Alonso.

McLaren’s Lando Norris and Daniel Ricciardo were 11th and 12th. Norris faces the same investigation as Hamilton – the younger Briton was behind the Mercedes at the time.