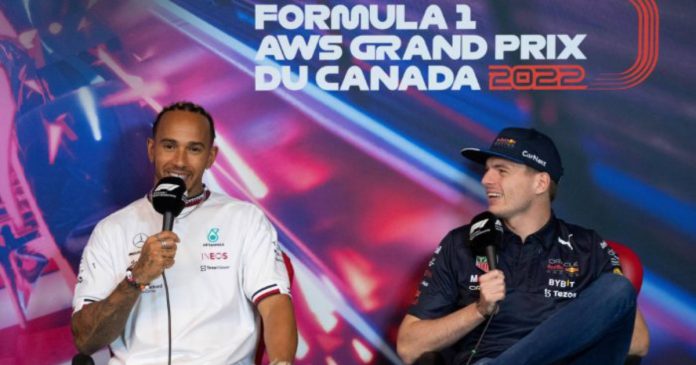 After an Azerbaijan Grand Prix and its aftermath in which much of the talk was about the bouncing effect of this season’s cars, the governing body responded to calls from teams and drivers to take action. On the eve of the Canadian Grand Prix weekend, the FIA’s Technical Directive stated any team that cannot fulfil the requirements of a stipulated “safe set-up” for their cars will have to raise the ride height by 10 millimetres.

Even before the press conference, at which he sat side-by-side with Hamilton for the first time this season, Verstappen, who is out in front by 21 points in his World Championship defence, had voiced opposition to the FIA announcement, saying: “If you can’t design the car properly for that then that’s your fault, it’s not the regs’ fault. For me, that’s a bit of a shame.”

He repeated that view when alongside Hamilton, whose Mercedes team had been among those wanting action – although they did not get what they would have wanted as, being among the most extreme examples of porpoising, it means they may now have to raise their ride height and consequentially lose performance. Verstappen, whose Red Bull team have been affected little by porpoising, told reporters in Montreal: “Regardless for me, whether it helps us or works against us, these rule changes in the middle of the year I don’t think it’s correct.

“I don’t think it’s correct that now they have to intervene and start applying these types of rules.” However, Hamilton, who had admitted after the Azerbaijan Grand Prix he had been “praying for the race to end” as his body was taking such a buffeting in the Mercedes W13, was happier with the Technical Directive from a safety perspective.

“Safety is the most important thing,” said the seven-time former World Champion. “I think in every team someone has complained about porpoising. We have to solve the problem for us and the future drivers. “It’s positive the FIA are working on it as we have this car for the next few years and it’s about getting rid of it and fixing it so all of us don’t have back problems going forward.

“I don’t think it will really change much in performance. I might be wrong. We’ll see. “We definitely can’t stress how important health is for us. We want to do our job but race the safest. There’s no need for us to have long-term injuries. We need to work closely with the FIA and not take it lightly, which I don’t think they are.” But Hamilton is not sure how much more Mercedes can do with the current spec of the W13 to alleviate the issue.

“It wasn’t until Barcelona that we started to be able to get it a little bit lower and we had no bouncing for the first time in Barcelona, except for the high-speed corners,” said the Briton. “Even when we raised the car [in Monaco and Baku because of the bumps on those street circuits] this thing still bounces. “And we can’t go any higher, actually. We are limited by the rear suspension now.”