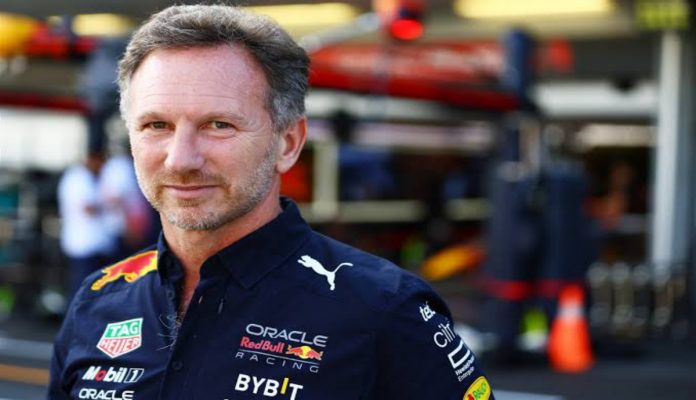 A furious Christian Horner says he’s “shocked and appalled” that McLaren boss Zak Brown has accused his team of cheating and said the insinuation has led to children of Red Bull staff being bullied at school. But Horner’s response has created fierce backlash on social media, with F1 fans calling him a hypocrite, ‘arrogant’, and ‘delusional’ for using children’s mental health to deflect from Red Bull’s spending breach.

Horner sat alongside Brown on Saturday in a fiery press conference supposed to preview Sunday’s United States Grand Prix – the first race since Max Verstappen claimed his second world championship. Yet instead it centred on the cost cap row which has engulfed Formula One. Red Bull exceeded last year’s $202 million budget cap when the team carried Verstappen to his contentious title win over Lewis Hamilton.

Although F1’s governing body the FIA is yet to confirm by how much Red Bull overspent, it is understood the figure is $3.2 m. Earlier this week, Brown wrote to FIA president Mohammed Ben Sulayem and said a financial breach “constitutes cheating”. “Obviously Zak’s letter is tremendously disappointing,” said Red Bull team principal Horner. “For a fellow competitor to accuse you of cheating, and to accuse you of fraudulent activity is shocking.“It is absolutely shocking that another competitor, without the facts or without any knowledge of the details, can be making those kind of accusations. “We have been on trial because of public accusations since the Singapore Grand Prix (on October 2) with the rhetoric of cheating, and the rhetoric that we have had this enormous benefit.

“Numbers have been put out in the media that are miles out of reality and that damages the brand, our partners, our drivers, and our workforce. “In an age where mental health is prevalent, we are seeing significant issues within our workforce. “Kids are being bullied in playgrounds because they are children of Red Bull employees. That is not right and it has come about because of fictious allegations from other teams without any fact or substance. “We are absolutely appalled at that behaviour. We have been subjected to three weeks of effective abuse. It is just not right and it has to stop.”

F1 fans vented on Twitter after those comments with one writing: “How on earth can Christian Horner (be) using the mental health card … what an arrogant p***k he is.” Another wrote: “Did I just watch Christian Horner talk about “mental health” of his team members? There is no difference between him. Here was a man that invited hatred towards Lewis for the crash in Silverstone last year. He did not care an atom about LH’s feelings and mental health.” Red Bull have been offered an Accepted Breach Agreement by the FIA, with both financial and sporting sanctions believed to be on the table. Such a deal, which has involved back-and-forth negotiations between Horner and Ben Sulayem here in Austin, would see Red Bull lose any right to appeal.

Red Bull could yet challenge the FIA’s decision. Their case would then be heard by a panel of independent judges, while a final option would be the FIA’s International Court of Appeal. However, both steps would see the team risk a harsher punishment – with the deduction of last season’s constructors’ points possible – and ensure the row plays out for several months.