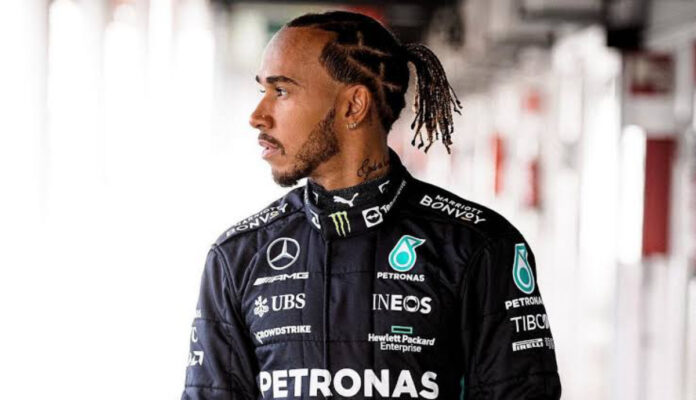 Hamilton and Russell only just scraped through Q1 in Imola, before an unfortunately timed red flag ended their moderate hopes of advancing to the final part of qualifying. It represented a 10-year low for Mercedes, who had not failed to get a car into Q3 since the 2012 Japanese GP. “I think we underperformed as a team today,” said Hamilton. “There are things that we should have done that we didn’t do.”

The eight-time reigning constructors’ champions have made a hugely disappointing start to the season under F1’s radical new design regulations, and any hope wet conditions might help them close the gap on Ferrari and Red Bull were quickly dispelled in Italy. Hamilton, who is seeking an eighth world title, cut a despondent figure after qualifying 13th, two places behind Russell, while Max Verstappen took pole for Red Bull ahead of the Ferrari of Charles Leclerc.

Lando Norris causes the final red flag of qualifying, leaving Max Verstappen on pole for the Sprint at the Emilia Romagna GP. “It wasn’t a great session,” he added. “Naturally it’s disappointing. “We came here with optimism and you know everyone is working really hard back at the factory but things just don’t come together.”

The fact that Imola is hosting the first Sprint of the season on Saturday means that both Mercedes will have the opportunity to improve their starting place for Sunday’s race, with a forecast for warmer conditions potentially aiding them. “We will work as hard as we can to move up in the Sprint, it’s going to be a difficult race, but hopefully tomorrow is better weather-wise and who knows, maybe we can move our way forwards.

“We’ll just keep working. It is what it is. Each weekend is a rescue.” Russell, who is second in the world championship in his first season at Mercedes despite the team’s struggles, explained why conditions on Friday were particularly challenging for them. The cold and wet track conditions led to there being five red flags during the session, which prevented Mercedes from getting the extra time they require to heat up their tyres. “We always struggled a little bit to get the temperature in the tyre and we’re always seemingly taking a bigger jump on the second lap,” Russell said.

The video you are trying to watch cannot be viewed from your current country or location. Mercedes’ George Russell reflects on the challenges the team are facing and his relationship with team-mate Lewis Hamilton. “We saw that in Australia as well when we compared to the Alpines and McLarens they were first lap qualifier and we had to do it on the third lap or even the fifth lap, doing the fast-slow-fast consecutive sequence. “So it was a bit of a shame with how red flag panned out today but if there is a weekend to not be where we want to be, the sprint weekend is the one to do it. “It’s not ideal but we’ve got the chance to recover those positions tomorrow.” Toto Wolff had earlier reiterated earlier on Friday to Sky Sports that Mercedes were up for the challenge after their tough start to the season, although the scale of their task was evident again in qualifying.

“It’s going to be a bit tricky going into the race tomorrow,” Russell added. “Usually in the sprint races not so much happens. “It will be interesting with these new cars if we can follow a bit closer, but I don’t think there’s enough laps with enough degradation for us to take our advantage where we’re generally stronger compared to our current rivals, which this weekend aren’t the top two teams. “Let’s see what we can do, we have got Sunday as well, and can only go up.”to