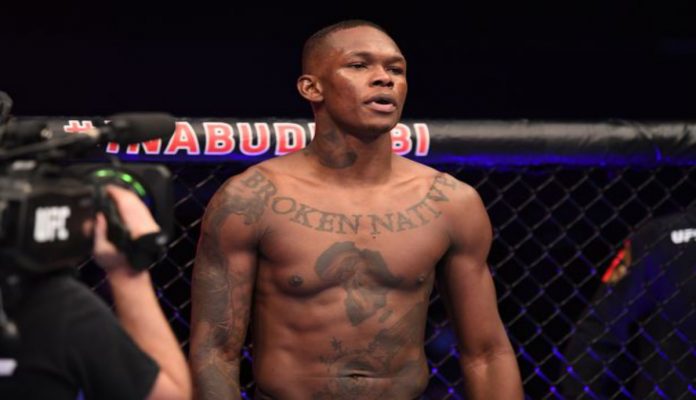 Israel Adesanya faced accusations of steroid use before he defended his UFC middleweight title against Paulo Costa due to his swollen nipple. Fans were puzzled as to why Adesanya’s right pectoral muscle was noticeably swollen before he knocked out Costa, who was unbeaten at the time, in their title clash at UFC 253 in September 2020. Many presumed the condition was gynecomastia, which is swelling of breast tissue that is caused by an imbalance of the the female hormone estrogen and male hormone testosterone.

Gynecomastia is a common side effect in males who take performance-enhancing drugs as they cause hormones to be altered, but Adesanya shot down these claims and insisted the swelling of his pec came from smoking marijuana. “My pituitary gland was checked, hormone levels are fine, estrogen and testosterone,” he told ESPN.

“I had an ultrasound and a mammogram for the first time. To be honest, it might have just been unhealthy living a little bit. Like smoking weed. That’s what the doctor from the UFC said. He said I need to stop, but I’m not stopping; I’m just going to slow down on the smoking weed. It’s just a fat deposit but after a performance like that [against Costa] I’d think I was on steroids too, because it was just mind-blowing.”

READ ALSO:   Xavi comes up with aces as Barcelona squeeze past sturdy Elche

Adesanya has been tested by the UFC’s anti-doping agency (USADA) over 50 times since debuting for the promotion in 2018 and has never been flagged for a banned substance. Marijuana use has been permitted by USADA since January of last year, as UFC fighters faced an anti-doping brach if they had over a certain amount of THC (the active ingredient in marijuana) in their system before the new guidelines came into effect.

UFC boss Dana White insisted the promotion have made a conscious effort to work with athletic commissions across the US to relax the rules on marijuana for out-of-competition testing, but fighters who are in-competition (meaning they have a fight coming up) still have to be wary of marijuana use. “When you’re in competition, you have to test these guys. You can’t let somebody go into the ring high. It just can’t happen,” White said.

The swelling of Adesanya’s pec has considerably reduced since his 2020 fight with Costa and is barely noticeable during his most recent fights. ‘The Last Stylebender’ looks to make the sixth defence of his middleweight belt tonight when he faces former kickboxing rival Alex Pereira in the main event of UFC 281 at Madison Square Garden in New York.