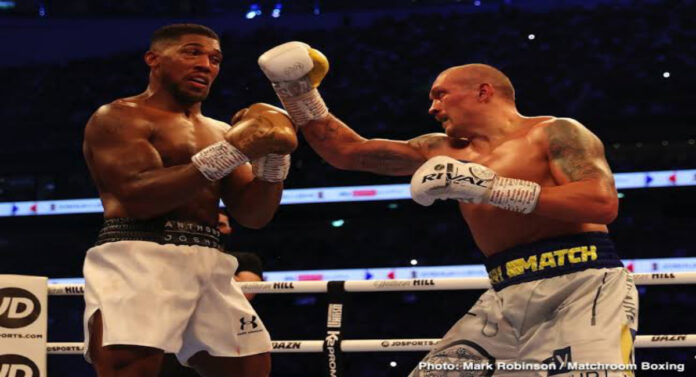 Anthony Joshua’s promoter Eddie Hearn is reporting that July 23rd is the cutoff date for the rematch with IBF, WBA & WBO heavyweight champion Oleksandr Usyk. If the contest fails to happen by that date, they’re moving on because AJ needs to fight twice in 2022. One worrisome factor in all of this is Usyk’s reported 22 lb weight loss from his time in the war in Ukraine.

That’s a lot of weight that Usyk lost, and it’s unknown if he’ll be able to put it back on in time for the fight against Joshua in July. For some reason, Hearn says he wasn’t aware of the news of Usyk having lost the 22 lbs, which is surprising. How could he not hear about it? Hearn is still doggedly determined to place the rematch in London, England, despite the interest from Usyk (19-0, 13 KOs) and his promoter Alex Krassyuk in staging the fight in Saudi Arabia.

Usyk obviously wants the rematch with Joshua (24-2, 22 KOs) to take place where it can make the most amount of money. It’s believed by some fans that Hearn wants/needs the Joshua rematch to take place in England so that it increases the chances of him winning. “It’s not true but it’s in discussion,” said Eddie Hearn to iFL TV when asked if the rumors are true about Joshua vs. Usyk 2 taking place in Saudi Arabia on a set date in July. “I got a call today from a journalist today that said, ‘I saw a journalist broke that it’s a signed deal for this date.’ It’s not,” said Hearn about Joshua-Usyk II taking place in Saudi Arabia.

“No formal contracts have been finalized. Yes, that date is under consideration and an offer has been made. We have other various sites and other various offers in place. “Obviously, this is a financial split, this deal with Usyk. So, Team Usyk, Alex Krassyuk, and all those guys are involved in those conversations. They’re going to want to go to the most lucrative site as well. “We’d like to do the fight in London. We also appreciate that there’s much bigger money for the fight elsewhere. We’ll make a collective decision over the next two weeks, and we’re reviving all the contracts and offers from various sites,” said Hearn.

Obviously, it’s tough for Joshua with his career being on the brink of plunging into the depths, that’s how it goes. It’s survival of the fittest in boxing, and If Joshua can’t hang anymore, you can’t be artificially saved from meeting his destiny by placing his fights in London to delay the inevitable. “Not necessarily but it’s looking likely like it’ll fall in July,” said Hearn when asked if the Joshua-Usyk 2 rematch will be moved to July due to Usyk’s situation in coming back recently from the war in Ukraine, having lost a lot of weight.

“It’s very important that AJ fights twice this year, and that’ll only happen if we do a fight in June or July. So that’s the absolute cutoff. I think the July 23rd date was mentioned. That’ll be the absolute cutoff date to make sure he’ll be able to fight in December again. “So, I think it sounds like Groundhog Day. Two weeks away from an announcement. Like I said, it’s being finalized now. All the offers have been reviewed, the contracts are being reviewed, and we’ll make an announcement in due course,” Hearn said. “Absolutely not,” said Hearn when asked if he has a plan-B if the Usyk fight doesn’t happen. “I’m not talking to anybody, I’m not looking to talk to anybody else. We know what we’ve been through.

“People trying to get AJ to step aside, and, no. That is the answer. That is the fight, that is the fight that is happening, and there will be an announcement in due course. “No, what did he say?” said Hearn when asked if he’d hear about Usyk having lost 22 lbs in the war in Ukraine. “How much weight Usyk had lost? Well, that’s good news. “That’s a lot of weight. I’m not sure that’s been reported correctly, but 22 pounds in one week? I don’t know but that’s a lot of weight. He’s been through obviously a difficult situation. We understand he’s training, he’s in training camp, and so is AJ, pretty much.

hat’s a lot of weight. I’m not sure that’s been reported correctly, but 22 pounds in one week? I don’t know but that’s a lot of weight. He’s been through obviously a difficult situation. We understand he’s training, he’s in training camp, and so is AJ, pretty much. “I think neither of them has started their official camp, but are about to do so. We’ll be finalizing the fight and we’ll be finalizing the fight and making a big announcement soon,” said Hearn. “I think there will be some additions to his team,” said Hearn when asked if Joshua will have additional coaches named for his camp. “Obviously, it’s a very personal decision for AJ, who he has in his training team, and he’ll make the announcements with 258 when that’s revealed.

“We talked about it a few days ago. It’s likely that you will see some new faces or a new face within the training camp, but it’s who AJ feels comfortable with. At the moment, he’s training really well and is in a great headspace and he’s ready to fight. “My job is to get the fight made, the contract signed, announce and promote the fight. “The training side will be taken care of by AJ and his team and I’m sure they’ll get it right. I would say about two weeks, yeah, or maybe sooner. I reckon that we’ll have news before the end of July. “That’s the safe option, isn’t it? The fight is going to be before the end of July. That way, I can’t lose,” said Hearn.