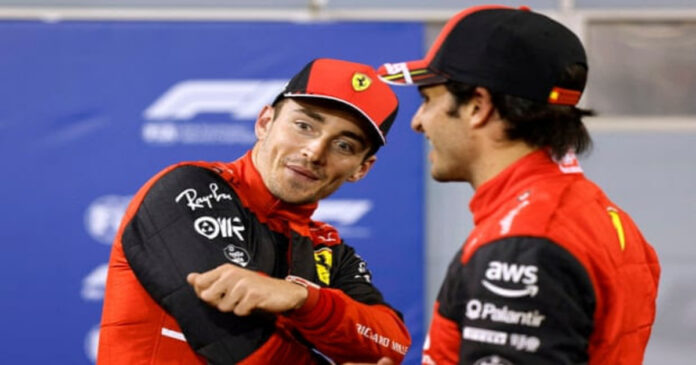 Formula One had been optimistic for a reinvigorated fight at the front in its new era of cars and on the form of qualifying for the season-opener in Bahrain, they can be satisfied their plans have delivered the goods in this opening foray. With Charles Leclerc and Ferrari claiming a thrilling pole position in front of reigning champion Max Verstappen, qualifying heralded a potential dog fight this season between three manufacturers at the front of the field.

A scrap most notable for it being Lewis Hamilton and Mercedes in the unusual position of playing catch-up to their rivals Red Bull and the resurgent Ferrari. The Scuderia are delivering on their pre-season promise with Carlos Sainz also claiming third place. For the sport’s previously dominant team, qualifying was a sobering experience. Mercedes are floundering and there is no quick fix in sight. For eight consecutive years the constructors’ champions, this is the hardest start they have endured since 2013. Hamilton was in fifth place, a full six-tenths down on Leclerc, with his teammate George Russell in ninth.

Hamilton, the seven-time world champion, pulled no punches in his assessment. “Those guys ahead of us are in another league,” he said. “I’m generally really happy today. Given how we’ve been the last few weeks and the problems we’ve had with the car, it’s a bit of a nightmare to drive.” Nor did he expect any great turnaround in race pace. “Those guys will be going away,” he said. “We’re not in the fight with those guys. My battle is with the guys behind most likely.” The problems facing Mercedes will not be solved overnight. Their car is suffering from what is known as porpoising, bouncing induced by a break in downforce on straights. If Hamilton is to earn an eighth title he will have to do it the hard way. For Ferrari, who have not challenged toward the front since 2019, having completely shifted their focus last year to the 2022 model built to the all-new regulations, their plan has paid off in spades. Red Bull are right on their tail, however, and on another day Verstappen, who was a tenth back, might have had the edge. A nip and tuck fight between the two teams can be expected in the race on Sunday. Leclerc and Verstappen, both elbows-out drivers, are likely to be uncompromising with one another into turn one.

On the first truly competitive run for these brand new cars, unleashed on low fuel and with their engines turned up, Leclerc held a slender advantage. For the final decisive laps in Q3 he was hooked up and put in an almighty lap with a time of 1min 30.558sec. Much as Verstappen attacked he could not match it,. A jubilant Leclerc revelled in what he had felt was the real potential of his car but noted ominously that he felt there was more to come.
It is Leclerc’s 10th pole position and Ferrari’s first since he took the top spot in Baku last year. The Monégasque driver is in every position to try to convert it with good form at the Bahrain International Circuit. He took pole here and was conformably leading in 2019 only to lose a likely win owing to a problem with his energy recovery unit. For F1, then, a sigh of relief at the top that their grand gamble on the new regulations has at least not delivered the feared utter dominance of a single team. Instead there is the promise of a competition only becoming more fierce, a gauntlet laid down by Ferrari, challenge accepted by Red Bull, with Mercedes working furiously to join the fray. On Saturday the FIA also published their enquiry into the controversial finale to the 2021 Formula One season in Abu Dhabi. They have concluded that the decisions made by the Race Director, Michael Masi, which ultimately denied Hamilton the championship were made in “good faith” but that “human error” played a part.
They also confirmed the result of the race, which Verstappen won to claim the title, stands, and that the governing body now considers the matter closed . There was no apology to Hamilton, who accepted that he had not expected the FIA to acknowledge their culpability. “Look, I wasn’t expecting an apology and it is not something I have focused on,” he said.

“We know that is the way it is, and that was probably not going to happen. But at least there is that transparency, and it has been called a human error and that is a positive step.” The report is unlikely to satisfy many deeply unhappy about the way the race was handled. Masi has since been removed from his post and it acknowledged he had been operating under immense pressure. It cited human error in the decision regarding unlapped cars, although it appeared the call was a conscious decision made by Masi and that the rules regarding when the safety car should have been brought in were open to “interpretation”.

Sergio Pérez was in fourth for Red Bull with Valtteri Bottas in sixth for Alfa Romeo. Kevin Magnussen back with Haas was an impressive seventh, with Fernando Alonso in eighth for Alpine. Pierre Gasly was in 10th for AlphaTauri.