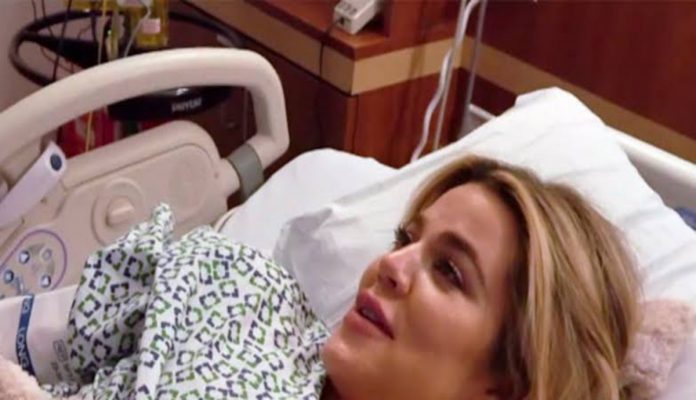 Khloe Kardashian has given an update on her health after revealing her tumor ordeal. Earlier this week, the Good American designer opened up about why she had been sporting a bandage on her cheek, after sparking concern. In a series of posts, the 38-year-old explained that she had a tumor removed from her face, insisting that she was in the ‘healing process.

During a live-tweeting session for the new episode of the Kardashians, she was questioned on how she is feeling now. The mom-of-two replied: ‘Baby!!!!! I’m good!! I swear!! Super grateful that I’m healthy and that I have a lifetime supply of bandaids. Seriously im ok. The worst is over and now its time to be haaaaapppppy.

On Tuesday, Khloe addressed her health issues in a series of posts on her Instagram story, explaining she spotted a lump that had been ‘caught early’. Posting a close-up of her cheek, she told fans: ‘After noticing a small bump on my face and assuming it was something as minor as a zit, I decided to get it biopsied 7 months after realizing it was not budging.’ The lump was checked out by two doctors, before the reality star was informed that she would have to go under the knife to remove it.

A few days later I was told I need to have an immediate operation to remove a tumor from my face,’ she continued, revealing that Dr Garth Fischer was able to ‘get everything’. ‘All my margins appear clear and now we are onto the healing process. ‘So here we are… you’ll probably see a scar (and an indentation in my cheek from the tumor being removed) but until then I hope you enjoy how fabulous I’m making these face bandages look.’

Although she may be left with a small scar, Khloe expressed her gratitude that it was caught early. ‘Thank you to my amazing doctors!! Garth I am so beyond grateful for you!!! I know how deeply you didn’t want to cut into my face, but you did it to protect me,’ she penned. ‘I trust you with everything and I am so grateful we caught this early. I am lucky and all I have is a scar to tell a story with.

‘Most people aren’t as lucky as me and I am forever thankful and grateful.’Khloe concluded the posts by adding that she was only going public with her situation to encourage others to get themselves checked out.