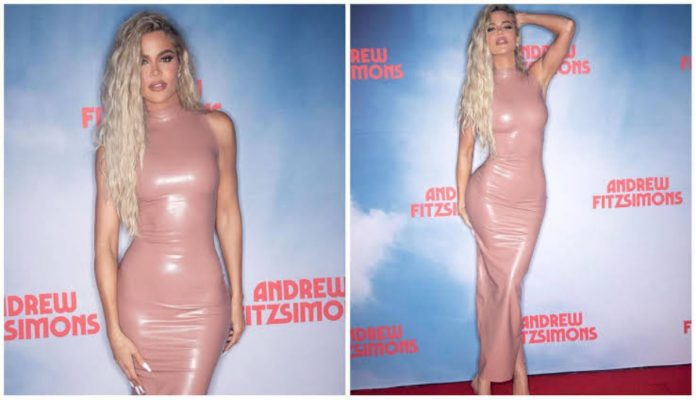 Khloe Kardashian was getting heaps of praise for her dramatic weight loss while getting ready for her first ever Met Gala on The Kardashians. The 38-year-old Khloe has made it abundantly clear throughout Hulu’s The Kardashians that she hates red carpets, but was still talked into making her Met Gala debut thanks to her sister Kim. The new episode of The Kardashians – entitled I Never Thought I’d See The Day – features a sequence where Khloe and Kim are getting ready together, with both Kim and fashion designer Jeremy Scott – who designed her glittering gold Met Gala gown – complimenting her new slimmer frame.

The scene shows Kim and Khloe at Khloe’s house, getting ready for a fitting, with Kim saying Khloe is, ‘skinnier than ever.’ Fashion designer Jeremy Scott tells Khloe that she is, ‘skinnier than the models who would do the show,’ as Khloe tries on a bustier. ‘I’m not big on red carpets. I think I’ve made that very clear, but good old Kimberly has a way with words and I am also sort of a pushover when it comes to some things, so I guess I allowed her to push me over,’ she added.

READ ALSO:   Selena Gomez Turns Up The Heat With Her New Bewitching Photoshoots...The Internet Is On Fire

Kim tells the camera, ‘Do you guys get how cool this is that you have Jeremy Scott in Khloe’s house, on camera? You guys just don’t get it. I mean, maybe you do. I get it. It’s a really big deal.’ Kim adds this year will be the first time that all of the Kardashian-Jenner sisters will be going to the Met Gala together, and it will be both Kourtney and Khloe’s first time.

Khloe says that somehow it’s online already, and Kim said she saw it on celeb gossip site DeuxMoi, which she jokes is, ‘the Bible.’ Kim adds in confession that Khloe has always been, ‘really nervous to go to the Met, but after this year, we decide she’s going, and that’s it.’ A producer asks, ‘Who’s we?’ Kim responds, ‘Me… and myself,’ while Khloe tries on her glittering gold gown.

Kim says in confession that they plan on getting ready and glamming together and they will, ‘make this the best experience ever and you’re gonna feel good about yourself and show the world, “F**k you, I’m invited to the Met, dude.’ Kim says the dress is, ‘so beautiful,’ though Khloe adds, ‘I can’t breathe but that’s fine,’ as Kim and Jeremy joke that breathing is overrated. Khloe asks if they will shorten the dress a bit and Jeremy says they will, but when she says she’s too tall, he insists, ‘You are not too tall. You are perfect. These gorgeous long legs, please, heaven.’

Khloe adds in confession, ‘I love that everyone is being so supportive, but that doesn’t take away from how many cameras are gonna be there and how long this carpet is, and that’s really overwhelming.’ Kim takes off as Jeremy says Khloe looks like a movie star as Kris arrives and Khloe says, ‘the boss… the other boss’ is here. Kris raves about Khloe’s look and Khloe asks if Kris has had a vodka and she says, ‘Of course I have.’