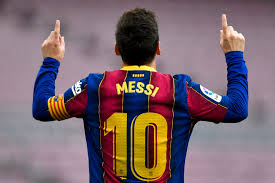 Joan Laporta has reflected on the big decision he was forced to make last summer, when Barcelona couldn’t renew Lionel Messi’s contract due to their financial struggles.

The Argentine forward ended up parting ways with the Blaugrana and joined Paris Saint-Germain on a free transfer, as the Catalan club had to comply with LaLiga’s wage cap rules.

“It is the saddest decision of all,” Laporta told Barcelona’s official media.

“I would never have wanted to make it, but I am not sorry either because we had to put the club above everything, which is what we did, even ahead of the best player. The situation was what it was.

“We came up against reality. It seemed that afterwards there was nothing, but Barcelona’s history continues and with work and good thought-out decisions we could return to the path of success, which is what we are doing.”

Laporta went on to express his gratitude towards Ronald Koeman for giving opportunities to youngsters, but stressed that his decision to sack him was correct.

“I had doubts after the first season, but out of respect for him we tried [to see how things would go],” added Laporta.

“There came a time when I saw that another painful decision had to be made. If I had had to make it earlier? Yes. I had to have listened to the intuition.

“I will always remember Koeman for the goal at Wembley, for a coach who had the courage to use young people. If he is hurt, I hope it will go away.”

The Barcelona president is pleased with the way Xavi Hernandez has managed to make the most of the opportunity he was given to coach the team he had captained as a player.

“Xavi has responded magnificently well to the opportunity that Barcelona have given him because he is a coach who knows the club, who loves the club, who respects the club’s decisions and who has the personality not to be influenced,” noted Laporta.

“He is clear about how we have to play and he is a hard worker, he loves football and that makes him live constantly what Barcelona is and what the team is. I’m very happy to have a coach like Xavi. I am convinced that he is a coach for many years to come and that he will give us a lot of joy.”

Laporta didn’t make clear whether Barcelona are in advanced talks to renew the contracts of Ronald Araujo and Gavi, but he expressed his desire to tie both youngsters down to new deals.

“The player has a lot to say in all these renewals,” Laporta declared.

“We have put standards back into the Barcelona first team. That’s why I’m very grateful to the players we’ve been renewing. If a player wants to stay at Barcelona, he will stay.

“I hope that it will be the same for Gavi and Araujo as it is for Ansu Fati, Pedri or Nico [Gonzalez]. I hope to reach an agreement with them, but Barcelona come first.”

Laporta stressed that the club need to make certain decisions and carry out some deals which will help them sign players in the summer.

“It will depend on the decisions of these two months,” continued Laporta.

READ ALSO:   Barcelona will renew Dani Alves for another season

Asked about the potential signing of Borussia Dortmund’s Erling Haaland, Laporta avoided going into detail about Barcelona’s transfer targets and placed his confidence in the individuals dealing with future signings.

“I can’t talk about players because otherwise we would raise their price tag,” he said.

“[Barcelona directors] Mateu [Alemany] and Jordi [Cruyff] are working very well with Xavi, they know what they want.

“We plan to strengthen all the lines. The advantage we have is that players of great quality want to come to Barcelona and that is a very important premise. Speaking of this player [Haaland], I don’t have to say anything.

“Let’s stop talking about players because we raise their price tags and do a disservice to Barcelona. The signings that have to be made have to be made by touching other pieces of this puzzle.”