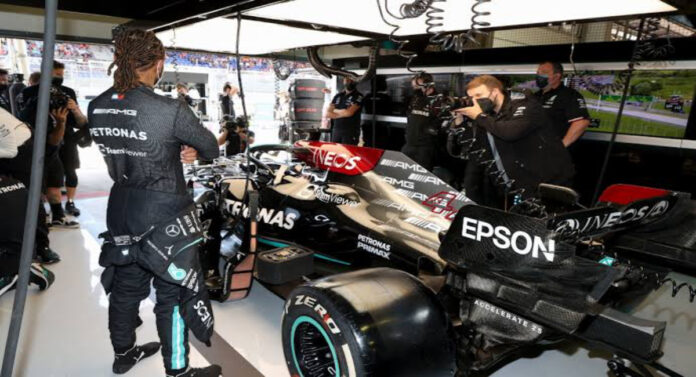 Hamilton’s W13 ran without the additional sensors in the Bahrain and Saudi Arabia races as a way of lightening the load on a car the team admit is “overweight”. But they found the information to be gleaned from those sensors a big miss, so they were added to the seven-time former World Champion’s car for the grand prix in Melbourne.

Adding weight to Lewis Hamilton’s car to gather data in Australia has supposedly paid off, at least according to Mercedes’ Motorsport Strategy Director James Vowles. The Brit, alongside compatriot and team-mate George Russell, put together a broadly positive weekend in Melbourne after a troubled start to the season. Mercedes were forced into a ‘painful’ decision when the year got underway in Bahrain as Hamilton’s overweight car forced the team to remove data-gathering sensors. Fixing his and Russell’s porpoising issues was subsequently made even trickier as the Silver Arrows lagged behind their rivals’ performance.

READ ALSO:   The Saudi Arabian Government To Invite Lewis Hamilton And Address Concerns He Has Expressed About Racing In The Country

Melbourne hosted a promising weekend for Hamilton and Russell, however, as the latter collected his first Mercedes podium and the 37-year-old came home fourth. Reliability has proven a strong point so far even if performance has left plenty to be desired, but the team are evidently working on that too and took the tricky decision of adding weight to that end.

When asked if the sensors helped the team gather helpful data, Vowles told the team’s YouTube channel: “The answer is yes. We always need to have a good understanding and be data driven as an organisation. “It was painful because taking sensors off the car [at the start of the season] because the car is too heavy means we’re losing out on information. What we concluded from the first two races is that we had too many questions without answers as a result of doing so.

“In a normal year you wouldn’t even consider not having sensors on the car. You would add what you need to, to make sure you understand what’s going on. But obviously this isn’t a normal year and the car is overweight. “Lewis did a fantastic job by carrying those extra sensors, but ultimately the cost was small. It was a matter of grams between the two [cars] which is what we wanted.

“Absolutely [we gathered good data]. It’s not that, from this, you can suddenly find something that will turn everything on its head and we’ll find a solution in one race, but it provides clues and understanding of what we need to do to move forwards.” While the team’s mechanics work hard to find answers to Mercedes’ problems, their early-season damage limitation has reflected positively in the points standings. Red Bull’s reliability issues mean the Silver Arrows sit second in the Constructors’ Championship, while surprisingly Charles Leclerc’s nearest challenger on the individual front is currently Russell.

Hamilton and his new team-mate seem to be getting on well after social media updates showed the pair after a surfing session in Melbourne. Their bond could be even stronger by the time they next take to the track if the seven-time world champion gets his wish of taking the youngster sky diving. The off-track activities promise to keep spirits high going into next weekend’s Emilia Romagna Grand Prix, although nothing would truly put the duo on cloud nine like a performance fix that could allow them to compete with the field’s top dogs.