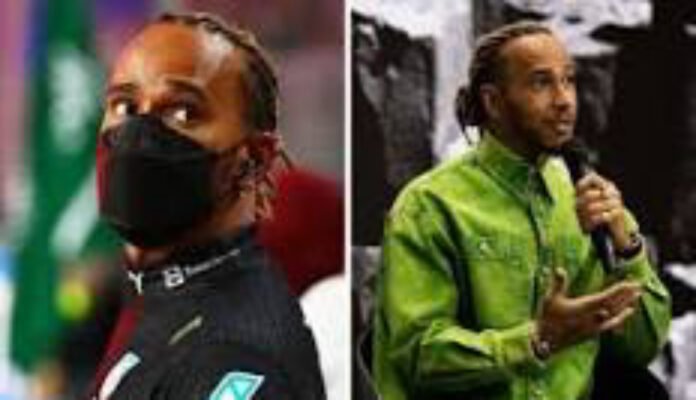 Lewis Hamilton revealed he once ‘blacked out’ in a fighter jet after ignoring advice to combat the G force with a breathing exercise. The seven-time Formula 1 world champion admitted to not taking the immense impact of G force while in a plane.

Hamilton attended an event hosted in Geneva by Swiss luxury watchmaker IWC Schaffhausen. The event saw the Brit sit down with Valentino Rossi, who won the MotoGP world title on nine occasions across an illustrious and iconic career. The two champions gave insight into their careers and legendary mentalities while discussing things like their insatiable need for speed. It led to Rossi – who retired in 2019 – declaring he wanted to fly in a fighter jet to try out the ‘unbelievable speed and G force’.

Hamilton first told Rossi to try, and later offered a warning of sorts to the Italian. It appears the 37-year-old didn’t take the guidance surrounding his flight seriously. “You definitely have to try,” Hamilton said. “You don’t notice the speed so much because you’re in the clouds in the sky so the perception of your speed is a lot different – it doesn’t feel as fast as a bike on the ground.

“But the G you’re pulling on the manoeuvres you can do, it’s amazing.” When asked to clarify his G force comments in comparison to F1, Hamilton said: “It’s much different because on bikes you’re generally pulling Gs in all directions: longitudinal, lateral, and then they’re probably getting a bit of vertical G – but it was nothing compare to a fighter jet. “When I’ve been up in the plane, I’ve blacked out. At one of the turns, I think we pulled like eight or nine Gs and I didn’t have a G suit on.

“They told me a breathing exercise that I should do, but I stopped doing it because I was like, ‘this is easy!’ – and then he turned and I just completely blacked out, so that was quite unique.” Hamilton currently sits fifth in the Drivers’ Standings, behind teammate George Russell, world champion Max Verstappen, Carlos Sainz and leader Charles Leclerc of Ferrari. The Australian Grand Prix is set to be absolutely crucial for Hamilton’s quest to secure the elusive eighth world championship, which would take him clear of Michael Schumacher with the most in F1 history.

Another below-par performance in Melbourne will see the Brit slip down the table – and his title hopes could move further out of reach. Mercedes are reportedly set to deliver upgrades to their car by the next race, with rumours that some parts have been accelerated due to their poor start. The 22-race 2022 campaign – which is expected to return to 23 races in the near future once a Russian Grand Prix replacement is found – continues with the Australian Grand Prix on April 10