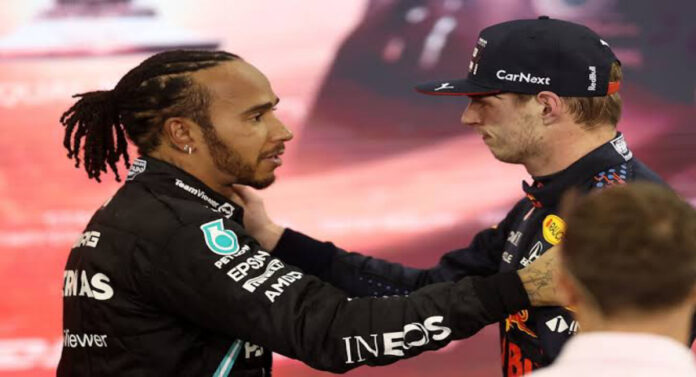 Lewis Hamilton declared there “was no better feeling” after his shock third-placed finish in the Bahrain Grand Prix. With his Mercedes car way off the pace, Hamilton was expected to get nowhere near the podium but he took advantage of both Red Bull cars suffering late mechanical failures to finish behind the Ferraris of winner Charles Leclerc and second-plalced Carlos Sainz. And the seven-times world champion relished the top-three finish and said: “There is no better feeling when you come together and have a result like this. Every point can make a difference. I have lost world titles by one point.

With Leclerc leading the Ferrari resurgence at the front, Hamilton was booked for a fifth-placed finish in his struggling car but, when running second, Max Verstappen had to retire with two laps to go and Sergio Perez, then running in third, had to do the same after spinning on the last lap. Hamilton refused to revel in Verstappen’s and Red Bull’s misfortune but said pointedly: “Ultimately we have done a better job because we had better reliability. So I don’t say it is luck, but hard work. It was not all down to luck because, in the end, our team did a better job than theirs this weekend.”
Red Bull – Mercedes’ bitter rivals – went into the season-opener hotly fancied to dominate with Christian Horner bullish about their strength. But the team principal, who believes both cars were struck by a fuel pump issue, was shell-shocked after the late disasters. He said:

“I can’t remember the last time it happened to us but it’s obviously your worst nightmare. It was a brutal finish. What looked like a decent haul of points suddenly evaporated.” With their one-two, the race was official confirmation that Ferrari are back in big-time business. And Leclerc said: “The last two years have been incredibly difficult for the team so we could not hope for better. It has not been easy but it is incredible to be back at the top.” Hamilton’s team-mate George Russell finished fourth and fellow Brit, McLaren’s Lando Norris, came in a disappointing fifteenth. Hamilton added: “Oh, for sure, we would not have expected [to get a podium. I woke up this morning hoping, super, super hoping that we would have a chance to fight, that we would have a car that’s better than we think. But we did struggle in the race. But George did a great job to get us third and fourth [which] I think is pretty remarkable given the problems that we have.

“The thing is with our car, we have a car that’s bouncing a lot everywhere. It’s not just in a straight line. We have very poor rear end through all the low-speed corners and all the medium-speed corners. The only place that is generally quite good is, relatively, in the high [speed corners] and then we are very slow in the straight line. So, I don’t know if it’s drag or if it’s power, we haven’t figured that out yet.”