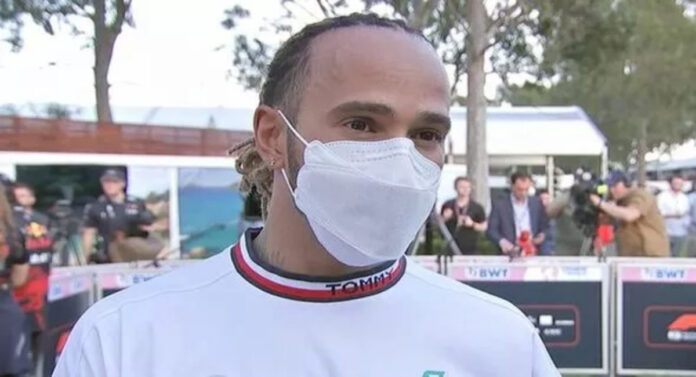 Lewis Hamilton has claimed his team radio outburst to Mercedes was down to his engine overheating and not his battle with George Russell. Hamilton moaned to his team in the closing stages of the race after he had dropped behind Russell to a safety car pit stop for the Mercedes rookie. The seven-time champion appeared to question the team, saying: “You put me in a really difficult position.” After the race, Hamilton was asked what he meant by his team radio comment.

He said: “I couldn’t fight for third because the engine was overheating so I had to back off. I just had to sit behind but as I said we bagged as many points as we could as a team and that’s great.” Hamilton also claimed P4 was a “great result” for the team after suffering for pace all weekend. The Mercedes pair were struggling to get inside the top 10 on Friday and were being beaten by midfield teams such as McLaren and Alpine.

The German manufacturer continually improved throughout Saturday and Sunday to close the gap to the teams in front. However, the team did benefit from retirements once again to score strong points. Red Bull’s Max Verstappen retired with a mechanical failure with just 20 laps remaining. Ferrari’s Carlos Sainz also failed to finish after spinning out at turns nine and ten on the second lap. Hamilton added: “In this weekend we’ve had so many difficult moments with the car.

“But nonetheless we will take these points and keep pushing.” Russell’s first Mercedes podium takes him second in the points standings after he has picked up top-five finishes in the first three races. After the race, he fired a warning to Red Bull and Ferrari that the Silver Arrows would not give up until they were back at the front. He said: “We got a little bit lucky today twice, but we’ll take it.

There’s so much hard work going on to get us back. We are never going to give up, we were a long way behind and yet here we are, on the podium. If anyone can, Mercedes can.”