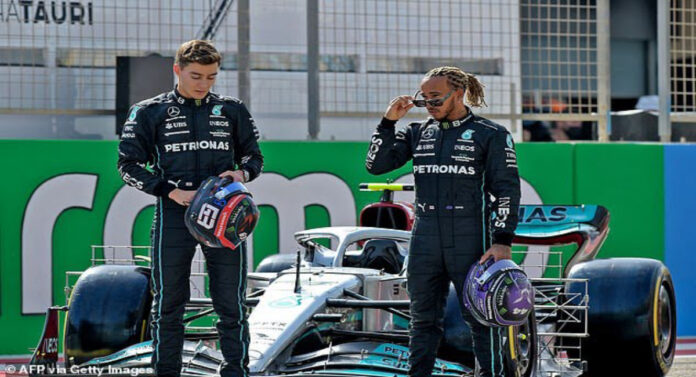 Mika Hakkinen is concerned that Lewis Hamilton could become troubled by having George Russell as his team-mate at Mercedes this season. Russell joined the team from Williams for 2022 to form an all-British driver paring having replaced Valtteri Bottas. Bottas had been Hamilton’s team-mate since 2017 and settled into a support role, leaving Hamilton to focus on battling rival teams including Ferrari and Sebastian Vettel as well as last year, Max Verstappen and Red Bull.

But Hakkinen, who is a two-time world champion from 1998 and 1999, believes some of the team-work dynamic could now be lost with Russell looking to prove himself at Mercedes. ‘I believe and I know from my experience that Lewis is relatively sensitive,’ Hakkinen told Unibet. ‘He is a sensitive person. When Valtteri was Lewis’ team-mate, the teamwork was perfect. Now, the support he’s going to get from Russell…The teamwork could be lost. That’s where Lewis can become irritated.’

Hamilton defeated Russell in their first outing as team-mates, finishing third and one place ahead of Russell at the season opening Bahrain Grand Prix. But the seven-time world champion had been on course to only finish fifth for Mercedes until the dramatic late double retirement of the Red Bull cars. Max Verstappen had been challenging for victory along with race winner Charles Leclerc prior to his car developing mechanical problems, but despite the world champion starting his title defence with zero points, Hakkinen believes the Dutchman could be even faster than he was last year.

Verstappen could go even quicker in 2022
‘I’m sure he will be faster than ever, I know from my experience that a title is about two-tenths per lap faster,’ the former McLaren star added.

‘It’s incredible, but it makes you more confident. The driving becomes more precise. You don’t just go full speed, you also know what a good lap is. I think Max is capable of that. But the question is how much risk he will take? We’ll see how much risk he’s willing to take.’ The second round of the world championship will take place this weekend in Jeddah for the Saudi Arabian Grand Prix.

READ ALSO:   Ferran Torres: The No.9 Barcelona have been searching for?