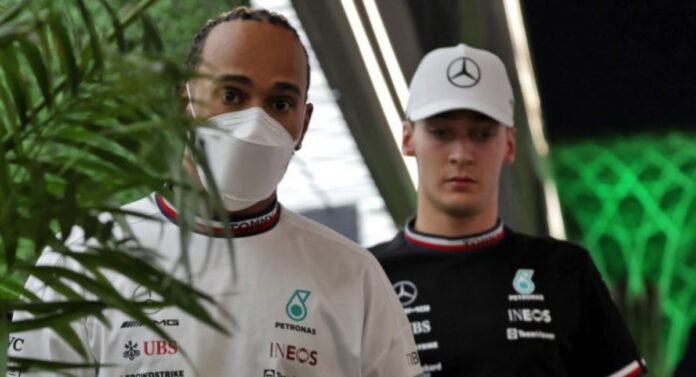 Mercedes were unable to match the performance level of leading duo Ferrari and Red Bull at the 2022 season-opening Bahrain Grand Prix, with the ‘porpoising’ down the straights making for an uncomfortable ride. The Jeddah Corniche Circuit, host venue of the Saudi Arabian Grand Prix, represents a much smoother track but the W13 was visibly still bouncing away, with both Hamilton and Russell complaining about it over the radio. Russell called it “pretty hardcore” during FP2.

Hamilton actually believes Mercedes’ issues have worsened slightly around the Jeddah track characterised by high-speed corners, while he also explained his team need to improve on their straight-line speed. Following FP2, Hamilton said: “It’s been an okay day. We still have many of the same problems we had in the last race but we are working through them. “It’s definitely a little bit harder here with the high-speed corners, but the grip is really good on the track and we just need to find some speed on the straights. “We’ll be heads down tonight, understanding the data from today and putting ourselves in the best position for qualifying tomorrow.”
Agreeing with his team-mate that the Bahrain issues have followed Mercedes to Saudi Arabia, Russell explained the race weekend from now on is about doing the best job possible in qualifying so that in the race Mercedes are there to pick up any scraps. It was a tactic that worked well last weekend in Bahrain as Hamilton made it onto the podium following a pair of late retirements for Red Bull, while Russell finished P4.

“It’s great to be back on the Jeddah circuit, extremely high-speed and exhilarating for the drivers, but we are still experiencing the same issues we faced last weekend in Bahrain,” said Russell.

“We know we still have a lot of work to do to close the gap on Red Bull and Ferrari. We’ll be fighting to maximise our opportunities for points this weekend and giving it our all tomorrow in qualifying. “Anything can happen around here so it’s important we are in touching distance to capture as many points as possible.”