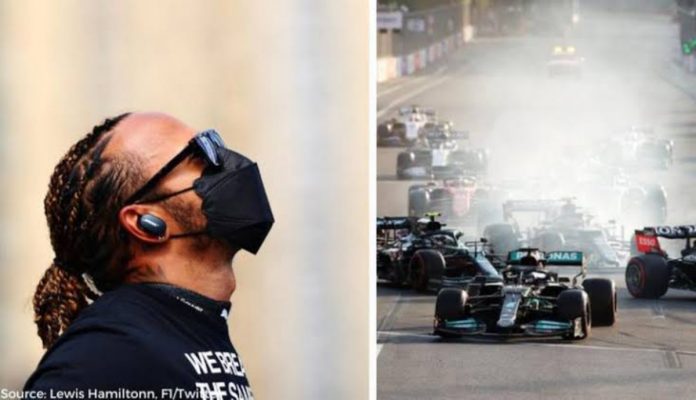 Lewis Hamilton is being investigated after qualifying for the Azerbaijan Grand Prix for driving too slowly. The FIA will look into whether the Mercedes star slowed at turn 12 before his last flying lap. Hamilton was made aware of the investigation on team radio and seemed angry at the decision. He simply responded: “I don’t know what you expect from me sometimes honestly.”

Footage from the McLaren of Lando Norris showed Hamilton crawling around the track with both McLarens stuck behind him. Norris was told on his team radio that Hamilton had to watch his delta and the team predicted the seven-time champion would get in trouble as he was the lead car.

His engineer said: “He’s got to keep an eye on his delta, if he doesn’t he’ll be in trouble. He’s the lead car, he’ll get in trouble.” Sky Sports F1 commentator Paul di Resta claimed the stewards would ‘not like’ what Hamilton had done. If found guilty, Hamilton will likely be handed a penalty which could see him start further down the grid. He went on to qualify seventh but this could be changed if the stewards find Hamilton at fault.

Alex Albon has also begged the FIA to investigate Fernando Alonso at the end of Q1. The Alpine driver appeared to slow down, creating a traffic jam behind before running wide and bringing out the yellow flags. Albon was furious over team radio, calling for the Spaniard to be ‘penalised’ for the incident. He said: “​​He needs to get penalised this guy. He has to. He was doing it the whole lap. He was driving slowly on purpose.”

Hamilton and Mercedes are desperate for a good weekend after a difficult start to the season. The Silver Arrows have been unable to match the pace of Ferrari and Red Bull despite optimism they had got on top of their issues in Barcelona. Since both Hamilton and George Russell have complained of bouncing issues in Monaco and this weekend in Azerbaijan. After Friday’s practice, trackside engineering director Andrew Shovlin said the team were not comfortable this weekend.

READ ALSO:   Lewis Hamilton Combines Funds With Tennis Star Serena Williams Has They Make Official Bid To Buy Chelsea FC...See List Of Billionaires They Have To Battle Against

He said: “We’ve got a bit of work to do to find time on single lap and long run. The balance isn’t a major issue but we’re lacking grip in the corners and the ride on the straights is uncomfortable for the drivers, so we need to improve that overnight.

“Our straight-line speed also isn’t great but some of that will be due to us hitting the ground on the straights. We did have some new parts on the car today, so we’ll review whether those were contributing to our issues. Overall, we’re not in a good position and it’s one where we need to be looking for some fundamental improvements rather than a case of fine-tuning.”