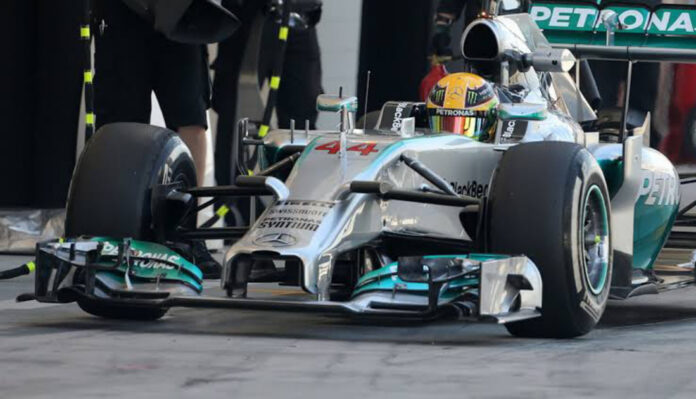 In a continuation of the form shown in pre-season, Mercedes remained adrift of rivals Red Bull and Ferrari during both practice sessions on Friday at the Sakhir circuit, with Max Verstappen edging Charles Leclerc for the fastest time of the day in P2. With less than 24 hours until the opening qualifying session of the season on Saturday, seven-time world champion Hamilton struck a downbeat figure after finishing P2 in ninth, more than a second behind Verstappen, and 0.6s behind his new Mercedes team-mate Russell, who was fourth.

For much of the pre-season many in the paddock have suspected that Mercedes, who have won the constructors title for the last eight seasons, have been holding back significant performance, but Hamilton insists it is a different situation to previous years. “We’ve had small problems in the past, relatively compared to this year, we’ve had much smaller problems,” Hamilton said.

“We’re faced with much bigger problems this year. Everything we do to try to fix it doesn’t really change that, so it appears that it’s probably going to be a more longer-term fix, so nothing in the short term.
“You look at the Red Bulls, they’re a long, long way ahead. It’s in the region of eight to nine tenths ahead of us, and Ferrari is probably something like half-a-second.
“So we’re fighting and scrapping with whoever’s behind them. My mindset is still just trying to be the best I can be, just getting the most out of the car.

“As you can see we’re a long way off, we’re not bluffing, like people assumed we were. It is what it is, we’ll work as hard as we can through it and do what we can.” Despite having outperformed Hamilton by coming fourth – marginally behind the second Ferrari of Carlos Sainz – Russell was also negative about his team’s chances going into the weekend.
“I think it’s clear we’re certainly not where we want to be. I think we made a bit of progress, but the pace is just not there at the moment. We need to go away with the data tonight and understand a bit why we’re both struggling with the car,” Russell said.

“We’re a long way off the pace of Red Bull, Ferrari, even the likes of AlphaTauri, Alfa Romeo are on our pace or quicker, so (we’ve) got a bit of work to do.

“We’re trying different things to change the performance, we’re throwing everything at it to unlock the potential that we think is there, but we’re just struggling to tap into at the moment. Everything we try is two steps forward one step back and there’s always a bit of a limitation. It’s going to take time. I think we all hoped we could solve it for this weekend but how things stand at the moment we aren’t in the fight and we’ve got work to do. “There’s nothing drastic you can do overnight. We’ve still got a race weekend on our hands and got to make the best of the situation and maybe damage limitation, but we need to look into it.”

A major issue for Mercedes throughout pre-season has been an inability to overcome ‘porpoising’ issues, which has caused their car to bounce severely in high-speed parts of the track.
‘Porpoising’ was an issue the entire grid faced at last month’s ‘shakedown’ in Barcelona when the all-new 2022 cars got their first outing, but while the majority of the grid have managed to reduce the effects, Mercedes continue to struggle.