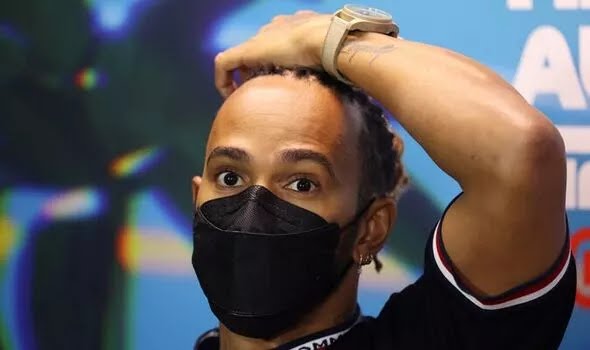 Lewis Hamilton has praised the performance of Mercedes teammate George Russell and clarified an apparent complaint about team strategy made during the Australian Grand Prix. Hamilton finished fourth in Melbourne, one place behind Russell, as Mercedes produced a solid showing despite continued performance issues with their car. It leaves the German team second in the Constructors’ Championship standings, ahead of Red Bull, with defending champion Max Verstappen forced to retire for a second time in the opening three races of the season.

That allowed Hamilton and, particularly, Russell to take advantage, with the 24-year-old recording his first podium at Mercedes to climb to second in the Drivers’ Championship. Hamilton had appeared angry at his team’s strategy during the race, claiming they had put him in a “difficult position” after Russell moved ahead of him after pitting during a safety car period, but the seven-time world champion explained afterwards that he was instead frustrated at an engine issue that prevented him challenging his colleague.

READ ALSO:   Kravitz: Lewis Hamilton Was ‘Specifically Targeted’ By Jewellery Rule... Following Recent Saga With FIA, “This Could Force Him To Retire"

“I couldn’t fight for third because the engine was overheating, so I had to back off,” Hamilton clarified. Praising his new teammate Russell, the 37-year-old added: “It’s incredible. He’s done an amazing job today, he had great pace. He’s been so solid these first three races and he’s working and really grafting away. He’s doing an amazing job. “I saw a bit of him racing [Sergio] Perez and I wish I could have been in it, but we’ll take these points and keep pushing.

“While we haven’t necessarily improved the car in these three races, I think we’ve extracted the most we could have points-wise. To come away with this result is great.” Ferrari’s Charles Leclerc has established a significant advantage after taking his second win of the season in Melbourne, but Hamilton is hopeful that Mercedes can make improvements to their car and force their way into the title chase. “There are 20 races to go. If you think realistically, with the way the sport goes in the way, it’s developing; the top teams generally develop at a similar rate,” Hamilton said.

“Will that be the case with this new car? Who knows. But I’m really really hoping we can get in the fight soon. “But with every improvement we make, [Ferrari] and Red Bull will probably make the same sort of step, so it’s not going to be easy. The gap is pretty big right now but there’s a long way to go.”