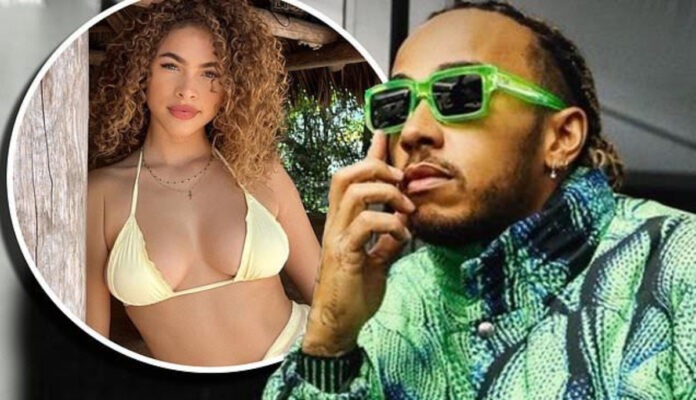 Lewis Hamilton has denied reports that he is back on celebrity dating app Raya after his relationship with model Camila Kendra ‘cooled off’. The racing driver, 37, was said to have ‘grown close’ to Camila last year after she posted snaps online of herself wearing his shirt in his Colorado home. However, it was claimed their budding union had come to an end in February.

A source had told The Sun: ‘Lewis’s Raya account has been revved up and is back in action. He first signed up four years ago but hadn’t been online because he was in a relationship. Now he is back on the market and his profile is active.’ They added: ‘Lewis describes himself as an astronaut on his profile.’ But a source close to Lewis has since told MailOnline that Lewis does not have an active subscription to Raya.

Lewis was said to have ‘grown close’ to Camila last year, as she posted snaps wearing his shirt in his Colorado home. However, a source divulged to The Sun that the pair are ‘no longer as close as they were.’ ‘She was staying at his home in Colorado and, although they had been pals for many years, Camila developed feelings for him and it became more romantic. ‘It’s cooled off now though and Camila is no longer with Lewis. She’s stopped following him on Instagram too.

READ ALSO:   Kravitz: Lewis Hamilton Was ‘Specifically Targeted’ By Jewellery Rule... Following Recent Saga With FIA, “This Could Force Him To Retire"

‘Her mates thought they would make a great couple but it clearly wasn’t to be and they’re no longer as close as they were,’ the source told the publication. Last August, the Mercedes driver sparked speculation he was ‘growing close’ to stunner Camila as she posted snaps wearing his shirt in his Colorado home. Camila shared photos in the F1 ace’s lavish home, to the delight of fans, even wearing a plaid shirt of his in one candid snap.

Another snap saw her pose in leggings and a bralet with one of Lewis’ trophies visible. Lewis’ most famous ex is Nicole Scherzinger, who he dated on-off for eight years until 2015. He has been linked to a string of women since ending his relationship with the Pussycat Doll. Model Barbara Palvin, Winnie Harlow and Kendall Jenner, singers Rihanna, Nicki Minaj and Rita Ora, and young socialite Sofia Richie have all been romantically connected to the star.