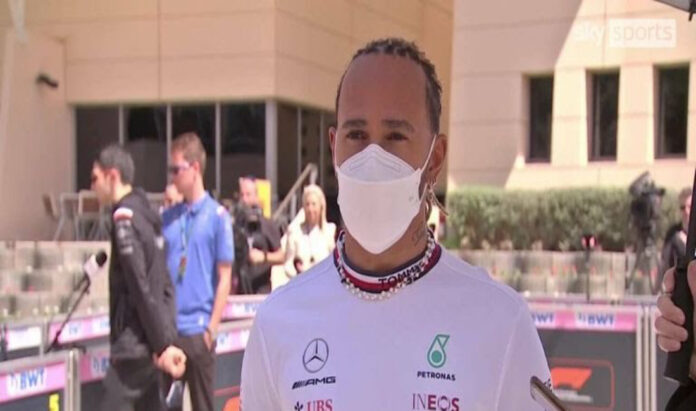 The FIA’s World Motor Sport Council are meeting this weekend at the season-opening Bahrain GP, with the findings from the inquiry into the 2021 title decider – where Verstappen overtook Hamilton on the final lap following much-criticised officiating decisions – expected to be released, potentially on Saturday.
How they are released is still unclear, but Hamilton – speaking before Friday’s practice – revealed he met with new FIA president Mohammed Ben Sulayem on Thursday night and the pair spoke about the report.

“I had a good meeting with Mohammed and there is a report,” Hamilton told Sky Sports F1. “We agreed that it’s important to have transparency.
“People will get to see this and know that the sport is moving in the right direction.”
Hamilton added: “[I’m] looking forward to seeing it come out and for people to know that the sport is transparent and we are learning from what happened in the past and we’ll make improvements moving forward.”

The FIA has already made changes following their Abu Dhabi investigation, with race director Michael Masi replaced for 2022 by two new race directors, while other alterations include Safety Car procedures and team radio bartering.
“I don’t think we need a full report,” said the world champion. “Of course, every year it’s good to discuss about what will happen the year before and what you can do better. That’s what teams do as well, you always analyse everything you do. “So we’ll find out and of course if things can be written down in an easier way or a way to understand it better, the wording, then for sure. Let’s see.”
Verstappen also insisted he has nothing to prove for 2022’s new era following his 2021 title. “I [had] the most wins, the most poles and most laps led,” he said. “People forget that. They only look at Abu Dhabi apparently.

“But we have more races than only Abu Dhabi in the season. “OOtherdrivers also had their say and most stressed the importance of the report being released, with Charles Leclerc stating: “I think it is really important to have that transparency and for us to be able to see it. “Two-timeworld champion Fernando Alonso, however, said: “I honestly don’t care.

“It was what it was, right or wrong. In that moment, race direction felt right. And in over the season, we could agree or not agree. We move on.”