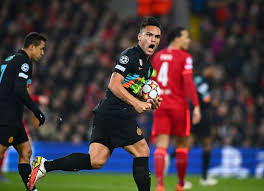 Liverpool were beaten 1-0 on the night but got the better of ten-man Inter Milan on aggregate as they reached the Champions League quarter-finals.

A year and a day after their last Anfield defeat, Jurgen Klopp’s side saw their 12-match winning run ended as Lautaro Martinez’s strike gave the visitors hope of a grandstand finish.

But Alexis Sanchez was shown a red card less than two minutes later, and a 2-1 aggregate victory sent Liverpool through to the last eight and kept their quadruple hopes alive.

It was Inter who started the brighter of the sides, buoyed by the manager’s words as Simone Inzaghi insisted in the build-up that his side needed to score in the first-half at Anfield.

Denzel Dumfries had a shot comfortably saved by Alisson, before Martinez was unable to set Sanchez through on goal as Inter countered promisingly.

But Liverpool gradually grew into the game, safe in the knowledge that they had no need to force things.

Alexander-Arnold whipped a brilliant delivery into the box, where Joel Matip used the pace to just divert it at goal but the centre-back saw his header cannon back off the bar. Less than a minute leader, Virgil van Dijk also went close as Milan Skriniar threw himself in the way to block.

There was very little in the way of goalmouth action in the first-half, which came to an end with Alexander-Arnold whipping a brilliant free-kick just wide of the post.

Mohamed Salah missed a massive chance to put Liverpool ahead on the night shortly after the break, as Samir Handanovic charged off his line to close down Diogo Jota. It fell perfectly for Salah ten-yards out, but he struck his effort against the foot of the post.

A crazy two minutes just after the hour mark blew the tie wide open before hopes of an Inter comeback took a huge hit as the celebrations in the away barely had a chance to finish.

Martinez, who up until this point had been bullied at every opportunity by Van Dijk, halved Inter’s aggregate deficit with a stunning strike from the edge of the box, cutting across the ball as it flew into the far corner.

This would have been the point the Liverpool fans got really nervy, had Sanchez not been sent off less than two minutes later.

The Chilean lunged in on Fabinho, won the ball but then caught the Liverpool man in his follow through and was shown a second yellow card. He was swiftly followed by the Inter assistant, who was given his marching orders for his protestations.

Liverpool unsurprisingly dominated possession with the extra man, and were denied by the woodwork for a third time when Salah’s half-volley bounced back off the post after a lovely pass from Naby Keita.

Inter never looked like getting the goal they needed to send it to extra-time, and Liverpool continued to go close to levelling it on the night as Luis Diaz was denied by a stunning block from Arturo Vidal.

But it was a goal that Liverpool didn’t need, as they booked their place in the Champions League quarter-final draw.