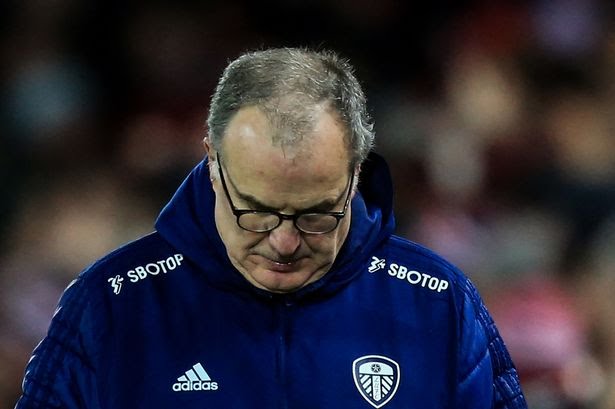 A few smirks have made their way down the M62 as Manchester United supporters underline the part they played in Leeds United opting to sack their charismatic manager Marcelo Bielsa.

Revered at Elland Road, Sunday was a bittersweet day for the Whites as they wave goodbye to a man who brought them back to the big time in 2020.

Given the intense rivalry, there was constant satisfaction from an Old Trafford perspective when Leeds spent years (and years) in the Championship and alarmingly even lower, too.

Success for Leeds was never to be celebrated in these parts, but their return to the Premier League brought back matches that meant and mean so much to both sets of fans. Bielsa was idolised at Leeds and rival supporters also took him to their hearts.

Not at United, it has to be said, though his open and expansive brand of football played right into their hands. As such, direct meetings with the innovative Argentine have resulted in 10 points from a possible 12.

So maybe, in that sense, United fans did enjoy having Bielsa around.

“Thank you Marcelo for everything that you have done for me. You saw in me what I didn’t even see in myself. You helped me grow as a player but, most importantly, as a person.”

An emotional Kalvin Phillips was among several Leeds players to pay homage to the departing El Loco.

Without his guidance, the 26-year-old might not have emerged as such a force in the Premier League as playmaker Phillips also struck up an England partnership with Declan Rice that so nearly helped the Three Lions to immortality at Euro 2020. It still hurts.

Despite concerns West Ham might dig their heels in over Rice, he remains a top target for United.

That quest to strengthen central midfield is no secret, but a would-be fee is not the only potential stumbling block there as Chelsea also monitor his position. There is the small matter of Champions League qualification, as well, and by no means are United certainties.

Rice holds all the aces when it comes to his next move.

Following the departure of his mentor, the same is not true for Phillips.