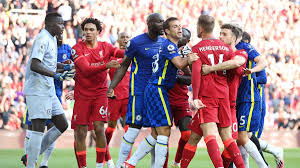 Mark Lawrenson is backing Liverpool FC to beat Chelsea FC on penalties in the League Cup final at Wembley on Sunday afternoon.

The Reds warmed up for their cup final with a resounding 6-0 win against Leeds United at Anfield on Wednesday night thanks to goals from Mohamed Salah, Sadio Mane, Joel Matip and Virgil van Dijk.

Liverpool FC have won their last nine games in all competitions, including victories over Inter Milan in the Champions League and Cardiff City in the FA Cup fourth round.

Chelsea FC are the reigning world champions after the Blues beat Brazilian side Palmeiras in the Fifa Club World Cup final last month.

BBC Sport pundit Lawrenson is backing Liverpool FC to beat Chelsea FC on penalties in the Carabao Cup final at Wembley on Sunday.

“I have a feeling this game is going to go the distance,” Lawrenson told BBC Sport.

“I have a feeling this game is going to go the distance,” Lawrenson told BBC Sport.

“Liverpool keeper Caoimhin Kelleher has a history of making saves in penalty shootouts, including against Leicester in the quarter-finals, and I just wonder if this final will end up being settled in the same way.

“Whoever wins, it will be extremely close. Chelsea will make sure of that, even though their form is not great. They carry much less attacking threat, but they are still solid and have not lost that.

“Liverpool are on a fantastic run of nine straight wins in all competitions and scoring plenty of goals too, but they might have to be patient at Wembley as they try to break the Blues down.”

Chelsea FC have drawn both of their Premier League games against Liverpool FC in the top flight this term following a 2-2 draw at Stamford Bridge in August followed by a 1-1 stalemate at Anfield in January.

The Blues were 2-1 winners against Liverpool FC in the FA Cup final at Wembley back in 2012 when Ramires and Didier Dogba fired Chelsea FC to victory.

If we’re looking at form, Liverpool FC will enter the cup final as favourites following a nine-game winning run in all competitions.

The Reds are scoring for fun, with Mohamed Salah, Sadio Mane, Roberto Firmino and Diogo Jota all in prolific form and Jurgen Klopp has added Luis Diaz into the mix.

Chelsea FC have recovered from a difficult December and January but Thomas Tuchel has some injury concerns heading into the cup final after Mateo Kovacic and N’Golo Kante picked up knocks in a 2-0 win against Lille in the Champions League.

I’m backing Jurgen Klopp to win his second domestic trophy at Liverpool FC with a 2-1 win in normal time at Wembley.