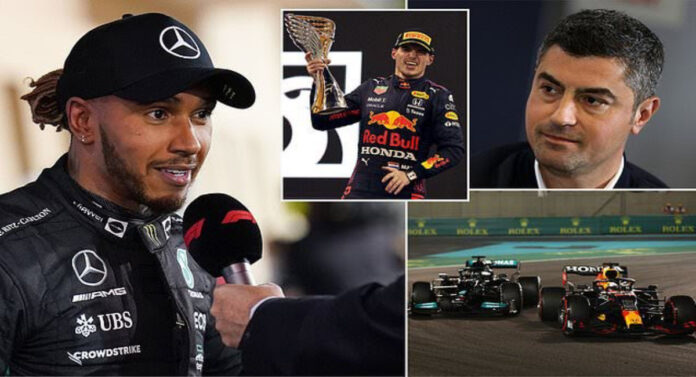 Seven-time Formula One champion Lewis Hamilton insists he was never expecting an apology after the results of the FIA’s investigation into Abu Dhabi were finally published. Hamilton looked certain to win his record-breaking eighth title before a late race safety car led to former race director Michael Masi allowing only cars between the Brit and Verstappen to unlap themselves.
This gave Verstappen a free run at Hamilton as racing resumed on the final lap, with the Dutchman making a move on the Mercedes driver to win his maiden title. Formula One’s governing body said ‘human error’ lay behind Masi’s failure to let all cars unlap themselves following the deployment of the safety car, having come under ‘immense pressure’ from ‘distracting’ radio exchanges from Mercedes and Red Bull.

The FIA also made clear that the race classification and the championship result is ‘valid, final and cannot be changed’. The key findings were offered in a seven-page summary just two hours before qualifying, following a meeting of the World Motor Sport Council in Bahrain yesterday. The late-race controversy unfolded 97 days earlier on December 12. Hamilton spoke to Planet F1 about the investigation report: ‘We cannot go back, unfortunately, and change the past so I just look at what I can do now.

‘I wasn’t expecting an apology and it’s not something I’ve focused on. ‘We know that’s the way it is and that was probably not going to happen. But at least there is that transparency, and it’s been called a human error and that’s a positive step.’ The FIA’s report was released just over an hour before qualifying for the Bahrain Grand Prix. The report says: ‘The process of identifying lapped cars has up until now been a manual one and human error led to the fact that not all cars were allowed to un-lap themselves. ‘Due to the fact that manual interventions generally carry a higher risk of human error, software has been developed that will, from now on, automate the communication of the list of cars that must un-lap themselves.

‘In addition, the 2022 Formula 1 Sporting Regulations have been recently updated to clarify that “all” and not “any” cars must be permitted to un-lap themselves. Race director Masi was sacked following the events of the race and replaced by a joint team consisting of Niels Wittich and Eduardo Freitas. Despite the Australian’s dismissal, the report states that Masi was ‘acting with good faith’.

The report read: ‘In combination with the objective to finish under green flag racing conditions applied throughout the 2021 season, the report finds that the Race Director was acting in good faith and to the best of his knowledge given the difficult circumstances, particularly acknowledging the significant time constraints for decisions to be made and the immense pressure being applied by the teams.’

Hamilton has to now put that controversy behind him and is focused on the 2022 season, finishing third in the opening race – the Bahrain Grand Prix – last weekend.