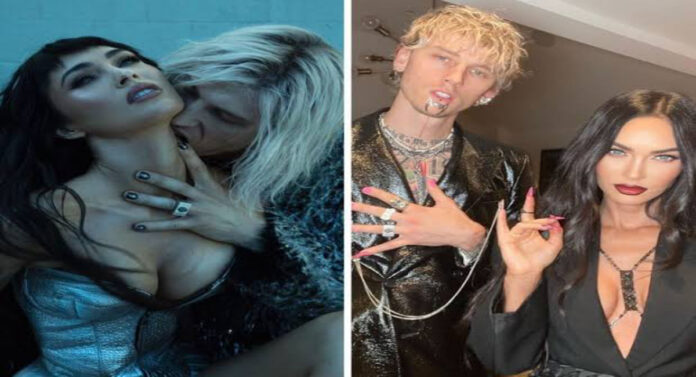 You’ll recall that on January 12, Megan Fox and Machine Gun Kelly announced that they were engaged. Obviously the news of their future nuptials was a big deal, but at the end of Fox’s post about the engagement, the actress just causally threw out that the two of them “drank each other’s blood” afterwards. This was just an offbeat statement she threw in for fun, right? Nope, Fox has confirmed that she and MGK do indeed drink each other’s blood for a specific “reason.”

Megan Fox recently sat down with Glamour to talk about both her career and personal life, and this marked her first interview since accepting Machine Gun Kelly’s marriage proposal. So when the interviewer asked for clarification about if the couple actually drink each other’s blood, the Transformers actress responded: “Yeah. So, I guess to drink each other’s blood might mislead people or people are imagining us with goblets and we’re like Game of Thrones, drinking each other’s blood. It’s just a few drops, but yes, we do consume each other’s blood on occasion for ritual purposes only.”

READ ALSO:   Could we get a brand new Barcelona backline in the summer?

“You heard it here, folks, Megan Fox and Machine Gun Kelly are not goblets of blood each night Game of Thrones-style or if Dracula was looking to enjoy a quiet evening at his castle in Transylvania. Instead, they only partake of drops for these “ritual purposes,” and Fox elaborated on what precisely this entails with the following words:

The Australian Skilled Immigration Program To Live And Work In Australia!
Australia Immigration Professionals I’m much more controlled. I read tarot cards and I’m into astrology and I’m doing all these metaphysical practices and meditations. And I do rituals on new moons and full moons, and all these things. And so, when I do it, it’s a passage or it is used for a reason. And it is controlled where it’s like, ‘Let’s shed a few drops of blood and each drink it.’ He’s much more haphazard and hectic and chaotic, where he’s willing to just cut his chest open with broken glass and be like, ‘Take my soul.”

Unsure if Megan Fox was joking, the interviewer questioned if this “actually happens,” to which Fox said that it’s “not exactly like that, but a version of that has happened many times.” Basically, consider these two a heightened version of Angelina Jolie and Billy Bob Thornton, who wore one another’s blood in vials around their neck when they were married. With Fox having recently celebrated MGK’s birthday, I can’t help wondering if there was any blood imbibing on that special day.

Megan Fox and Machine Gun Kelly met while working on Midnight in the Switchgrass, a movie that MGK has since denounced. It was around that time that Fox had separated from Brian Austin Green (their divorce was finalized in November 2020), and Fox and MGK went public with their relationship in June 2020, a few weeks after MGK’s music video for “Bloody Valentine” was released, which Fox appeared in. Fox and MGK are also co-starring in Good Mourning, which dropped its red-band trailer last week. It hasn’t been announced yet when their wedding will happen, but MGK expressed interest in late February of having it happen at a location where there can be a “red river,” so at least he’s on brand with the blood of it all.

We’ll keep you apprised on more interesting tidbits concerning Megan Fox and Machine Gun Kelly’s relationship. You’ll be able to see them together again onscreen in Good Mourning when it arrives in theaters and on-demand May 20.