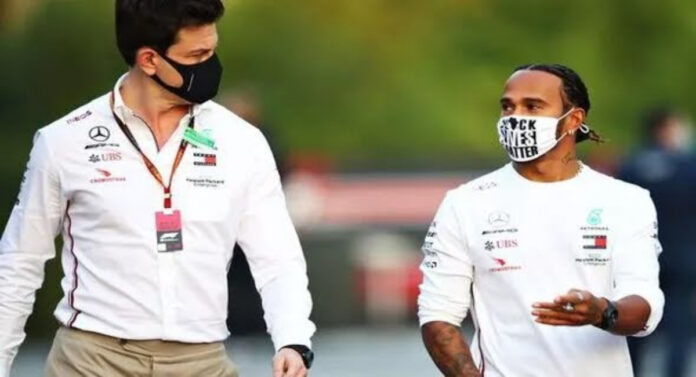 Former F1 star Nico Rosberg does not think Toto Wolff should be fired as Mercedes team principal. The Austrian enjoyed unrivalled success at the helm of the Silver Arrows, winning eight constructors titles in a row and seven drivers titles. However, his team have struggled this season and Hamilton once again finished outside the points as he crossed the line 13th after a dismal weekend in Imola. Despite the setback, the 2016 world champion still deems Wolff the right man to lead Mercedes through this current slump.

“Of course he sometimes has tantrums, we have all seen that, but nevertheless, in my opinion he is the right man to lead such a team through such a difficult situation,” Rosberg said. Following another difficult race in which Hamilton was lapped by Max Verstappen for the first time in five years, Wolff appeared on the team radio and told the Brit: “Sorry for what you have needed to drive today.

READ ALSO:   Xavi comes up with aces as Barcelona squeeze past sturdy Elche

“I know this is undriveable and not what we deserve to score as a result. We’ll move from there, but this was a terrible race. We will come out of this.” But Rosberg thinks the blame for Hamilton’s poor start to the season is also on his shoulders and the team are trying to keep his spirits up. “Let’s not forget [George] Russell is in P4 with that same car, so Lewis definitely had a big role to play in that poor result this weekend. Russell still managed to get P4 out of it with a brilliant weekend, so there was more in that car.”

The 24-year-old has made the most of his first four races as a Mercedes driver, and has finished above his legendary teammate on three occasions so far this season. He battled to a fourth-placed finish despite suffering back and chest pain during Sunday’s Imola GP as a result of the “porpoising”, which causes the car to bounce up and down during the race.

“The bouncing, it really takes your breath away. It’s the most extreme I’ve ever felt it,” Russell said. “I really hope we find a solution and I hope every team struggling with the bouncing finds a solution, because it’s not sustainable for the drivers to continue.

“This is the first weekend I’ve truly been struggling with my back, and almost like chest pains from the severity of the bouncing.” Russell currently sits fourth in the drivers standings with Hamilton in seventh, while Mercedes are third in the constructors table, 47 points behind leaders Ferrari.