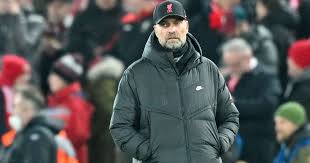 Jurgen Klopp admitted to feeling mixed emotions after Liverpool secured passage to the Champions League quarter-finals despite defeat to Inter.

The Reds moved into the last eight with a 2-1 win on aggregate despite Lautaro Martinez’s second-half strike deciding an engrossing second leg at Anfield.

And, though Klopp declared himself ‘really happy’ to progress further in Europe’s elite competition, he also confessed to feeling disappointed by the end of a 15-game unbeaten streak.

He said: “[Assistant boss] Peter Krawietz always says the art of football is to lose the right games. I still hate it.

“If there was any type of game we could have afforded to lose it was tonight because the main target of this competition is to get through. But it’s not that I’m here over the moon.

“I’m really happy that we went through because when we saw the draw it was like, ‘Okay, that’s a tough one’. So we went through and I think over the two legs we deserved it, so that’s fine.

“We had some problems in the game tonight for different reasons, one is the quality of the opponent, they are a really good football team.

“They set up like Leeds under Bielsa, just with much more quality and that makes it really tricky to play against them.

“It was a bit slapstick how we missed our chances in the end, we still could have won the game.

“The only thing I am really interested in is that it’s fair that we are through against a really strong opponent, now let’s carry on.”

Martinez’s goal could have set up a thrilling final half an hour on Merseyside were it not for teammate Alexis Sanchez being shown a second yellow card almost immediately after.

Klopp had no doubt that the Chilean deserved to be cautioned and also suggested he could have been sent off for a foul on Thiago Alcantara in the first half.

He continued: “I don’t understand why we have to discuss that because in football, if you can win the ball only by bringing yourself in a position that you endanger the opponent then you don’t win the ball.

“If Fab goes in with the same intention then both players get injured but he is there because he judged the ball not flying in.

“Because Sanchez is flying in, he touched the ball but in the end he cannot stop and hit Fab in a really bad way, to be honest.

“And I think he was really lucky that he didn’t get a different colour card in the first half for the foul on Thiago, leg that high.

“Passion is absolutely good but if it leads to these kinds of things, it just doesn’t help.”