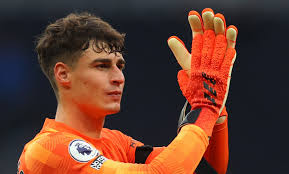 Premier League side Newcastle United are being tipped for a summer swoop for Chelsea stopper Kepa Arrizabalaga.

Spanish international Arrizabalaga has played a back up role at Stamford Bridge in the last 12 months with Edouard Mendy well established as the Blues No.1 choice in goal.

Arrizabalaga became the most expensive goal keeper in world football after moving to Chelsea in a £72m move from Athletic Club in 2018.

Due to his lack of first team football, both Kepa and Chelsea are open to an exit in the coming months, with the club setting their current asking price at £50m.

According to reports from the Daily Star, the Magpies could make a bold move for him, as part of an expected big summer of spending at St. James’ Park.

La Liga giants Atletico Madrid have also been linked with a possible move for the 27-year-old, with growing concerns over Jan Oblak’s form so far this season.