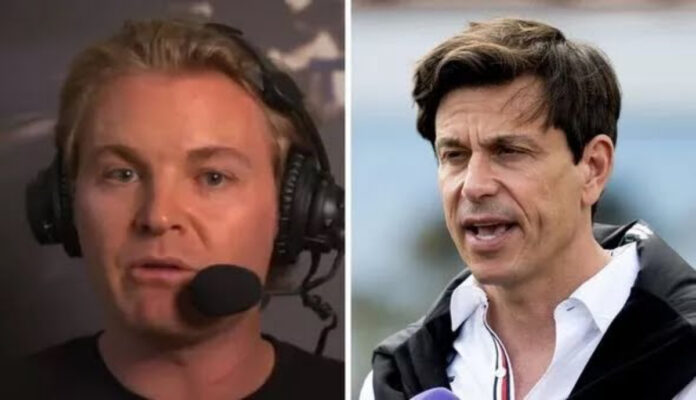 Toto Wolff jumped on team radio to apologise to Lewis Hamilton after the Emilia Romagna Grand Prix for Mercedes not giving him a car capable of challenging, but Nico Rosberg doesn’t think the Silver Arrows team principal is telling the whole “truth”. It proved to be another frustrating race weekend for Hamilton which all began on Friday.

The seven-time world champion qualified down in 13th with Mercedes only just getting out of Q1. George Russell enjoyed slightly better success, qualifying 11th with the young Brit finishing where he started in the sprint. Hamilton dropped one place though to 14th and had no luck in the start on Sunday despite both Carlos Sainz and Daniel Ricciardo going off the track. Russell was able to capitalise on the mayhem in front of him, quickly moving up to sixth, but Hamilton was stuck behind a train of cars and was up to 11th.

And he remained outside the top 10 for the entire race though as Hamilton found himself stuck behind Pierre Gasly’s AlphaTauri. The FIA’s decision to delay activating DRS played a part as when it was opened, Hamilton had already been on the medium compound for several laps. Wolff jumped on team radio to apologise to Hamilton after the race, but Rosberg believes Russell’s performance in finishing fourth paints a much bigger picture for Mercedes.

“Here, Toto was playing the mental game which is very smart on his behalf again, taking the blame themselves and really trying to support Lewis mentally,” Rosberg said on Sky Sports. “Lifting him up and saying that it wasn’t Lewis’ doing, it’s on us. “It’s very smart because it’s not quite the truth and let’s not forget that Russell is in P4 with that same car. So Lewis definitely had a big role to play in that poor result this weekend.”

Russell is already 19 points ahead of Hamilton in the championship with the new Mercedes driver enjoying an impressive start. The 24-year-old has been consistent in each of the opening four races, finishing fourth, fifth, third and fourth so far. He’s managed to beat Hamilton in three consecutive races with the 37-year-old conceding after the race that his chances of winning the championship are already over.

“A weekend to forget for sure,” he said. “I’m out of the championship for sure. “There’s no question about that. But I’ll still keep working hard as I can and try to somehow pull it back together.”