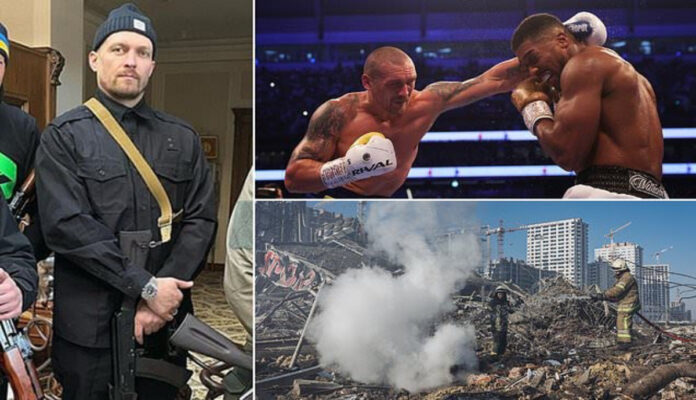 Oleksandr Usyk is understood to be in the throes of extricating himself from the front line of the war in Ukraine to prepare for a world heavyweight championship mega-rematch with Anthony Joshua in June. The Ukrainian who inflicted a sensational upset when thrashing Joshua to claim the WBA, IBF, WBO and IBO heavyweight titles last September at the Tottenham Hotspur Stadium has been given permission to leave by his country’s ministry of defence.
Joshua immediately triggered a rematch clause in their contract. Now Usyk expects to be ready for a first defence of his title back in London, with the same venue and Wembley Stadium in contention to stage the fight.

With the Queen’s Platinum Jubilee celebrations occupying the first weekend in June and promoter Eddie Hearn strongly hinting now that the fight is re-scheduled for that month. the likeliest date is Saturday the 11th. Usyk signed up with the Kyiv Territorial Defence when Russia invaded Ukraine. Although able bodied men aged 18 to sixty are ordered to stay within borders and fight for the country, the 35-year-old Usyk has been granted an exemption ‘in the national interest.’
So, too, has former two-weight world champion Vasyl Lomachenko but he has decided to remain on the battlefield rather than go to Australia next month to try to regain his lightweight titles from George Kambosos Jr. Both Usyk and Lomechenko are national heroes. So are former world heavyweight champions Vitali Klitschko, now Mayor of Kyiv, and his brother Wladimir who are leading figures in the intensifying defence of the capital.

Without risking the delicacy of the situation by actually confirming the Usyk fight, Hearn says: ‘I strongly believe Anthony Joshua’s next fight will be against Olexsandr in June.’ Usyk is said to have been reluctant to leave his comrades-in-arms but his decision turned on information that Joshua was seeking an interim opponent to help restore confidence fractured by his overwhelming defeat in their first fight. His team see that as an advantage he should avoid losing if at all possible.

There is also concern in the Usyk camp that such a move could jeopardise the rematch clause and that the longer the war and the delay, the likelier Joshua could be pitted against another rival for interim world titles. The shock of Joshua’s fall from grace was compounded by Usyk having only just moved up from becoming the first undisputed world cruiserweight champion in ring history. Remarkably, what he lacked in size he more than made up for with the high-class technique which is a characteristic of Ukrainian boxers and he almost KOd Joshua in the last minute of a one-sided points victory.

One report last night suggested that Usyk has already made it alive out of Ukraine. As he will be unable to return to his usual training base in the hills outside Kyiv, he is expected to set up base for the required eight-to-nine week camp at a gym at Oxnard, outside Los Angeles, where he and Lomachenko have worked previously.

Joshua is in serious training already. As is Tyson Fury, who Joshua was on track to fight for the undisputed world heavyweight crown until Usyk blew that out of the water. The Gypsy King is in full preparation near his home at Morecombe for the Wembley Stadium defence of his WBC and Ring magazine belts on April 23.